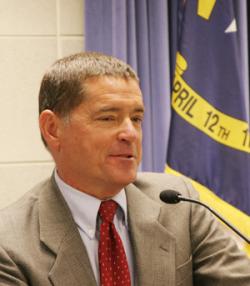 North Carolina would put itself into an “infinitely indefensible” position if it tries to take steps on its own to curb global warming, according to Robert Balling, one of the nation’s leading global-warming “skeptics.”

“By no means do I lay in bed tonight believing that by riding my bicycle to school every day, I’m helping to fight global warming,” Balling told the state’s Legislative Commission on Global Climate Change on Tuesday.

“With all respect, you could announce today that North Carolina is about to vanish from the face of the Earth, and we’ll never see it on this diagram [plotting global temperatures],” said Balling, a professor in the climatology program at Arizona State University. “Or you could announce tomorrow that we’re going to buy everyone in North Carolina their own SUV and have everyone double their amount of coal burning, and it just doesn’t show up on the diagram.”

Balling agrees with most scientists that the Earth is warming. He also agrees that people play a role in the warming. He disagrees with scientists who believe that people can have much impact on global temperatures. “We are recovering from the Little Ice Age,” he said. “We would expect warming to occur. I’m not sure the warming would not have occurred if no human had ever walked the Earth over the past 100 years.”

Balling’s ideas drew interest from some panel members. “My take on what you said is for North Carolina to do anything significant in terms of what happens here would be all cost and no benefit,” said Edward Erickson, an economics professor from North Carolina State University.

Balling agreed with that assessment. “Of course, there can be benefits of having technology that’s cleaner,” he said. “North Carolina can benefit a thousand ways from great ideas of the group. But to sell the idea that you’re fighting global warming becomes absurd.”

Other commission members cast a more critical eye on Balling’s findings. If people increase the amount of carbon dioxide in the atmosphere, “Is that not of concern to us as a society?” asked Thomas Cecich of Apex. “Regardless of whether we can do anything about it in North Carolina, as a society shouldn’t we be concerned and shouldn’t we be addressing that?”

“My experience in environmental policy is that states tend to aggregate together, and then nations do,” said Stephen Smith, executive director of the Asheville-based Southern Alliance for Clean Energy. “And there are a number of states that are obviously beginning to take action across the United States.”

States will be forced to take some steps, Smith said. “Ultimately, when action is taken, it’s going to come back to the state and local level,” he said. “These are the laboratories of democracy, and this is really where the rubber meets the road where most action takes place. Are you saying that you don’t think any states anywhere should take any action on this as the consensus continues to build that we need to get an inflection point in our emissions and stabilize the climate?”

Balling has a different take on Smith’s argument. “You think the rubber is going to meet the road at the state level,” he said. “I agree. It’s at the state level where people might begin to question you and say, ‘What is this costing me, and what are we gaining by doing it?’

“And if the state begins to implement a policy that costs the taxpayer any amount of money, the taxpayers are going to demand to know: ‘What is it I get from this investment?’” Balling said. “I stand up and tell them the answer’s absolutely nothing.”

Balling was the first in a series of speakers to address the special commission Tuesday. Legislative leaders asked the group to study global-warming issues. The commission could make recommendations to the full General Assembly.

The commission will meet again April 4. Lawmakers will return for a new legislative session May 9.