Will continued teacher confrontations eventually hurt their cause?

A sea of red shirts and picket signs flooded downtown Raleigh on Wednesday, May 1, and, for now, public opinion may be in their favor.

But are the teachers and N.C. Association of Educators, which organized the rally, overplaying their hands, two policy experts ask.

The teachers marched from the NCAE headquarters to Halifax Mall, where they took part in a rally and met with legislators. Unlike last year’s May 16 rally, teachers didn’t crowd the General Assembly, but instead held meetings outside.

“If the policy gets closer to their goals, what do they do next?” Taylor asked. “I think you’re seeing this a little bit, which may be problematic for broad, popular support, in that some of this is morphing into a broader left-wing, progressive agenda rather than the needs of teachers, students, and the public school system.”

David McLennan, professor of political science at Meredith College, said the rally could result in opposite outcomes.

“On one hand, it’s a symbolic demonstration of strength to get that many teachers literally right outside the legislature. … Legislators would be foolish to think this doesn’t mean something electorally,” McLennan said.

But, McLennan said, closing numerous school districts for the rally has a marked downside. Parents with students in those school districts may have had to scramble to find child care and food. Some may be questioning raises for teachers and increased retirement benefits while their salaries stay the same.

The Meredith professor said the rally agenda has expanded since last year. This may have boosted the number of protesters, but it also may have dissuaded some who don’t support the larger political goals.

“They may have needed to do this to bring more people out to show the support, but on the flip side that could end up hurting their cause for teachers because people may not be able to support a $15 an hour wage or Medicaid expansion,” McLennan said.

Though not marketed as a partisan event, some see the teacher march as a political rally and the NCAE as an extension of the Democratic Party. Gov. Roy Cooper and the Rev. William Barber were among the many speakers Wednesday. 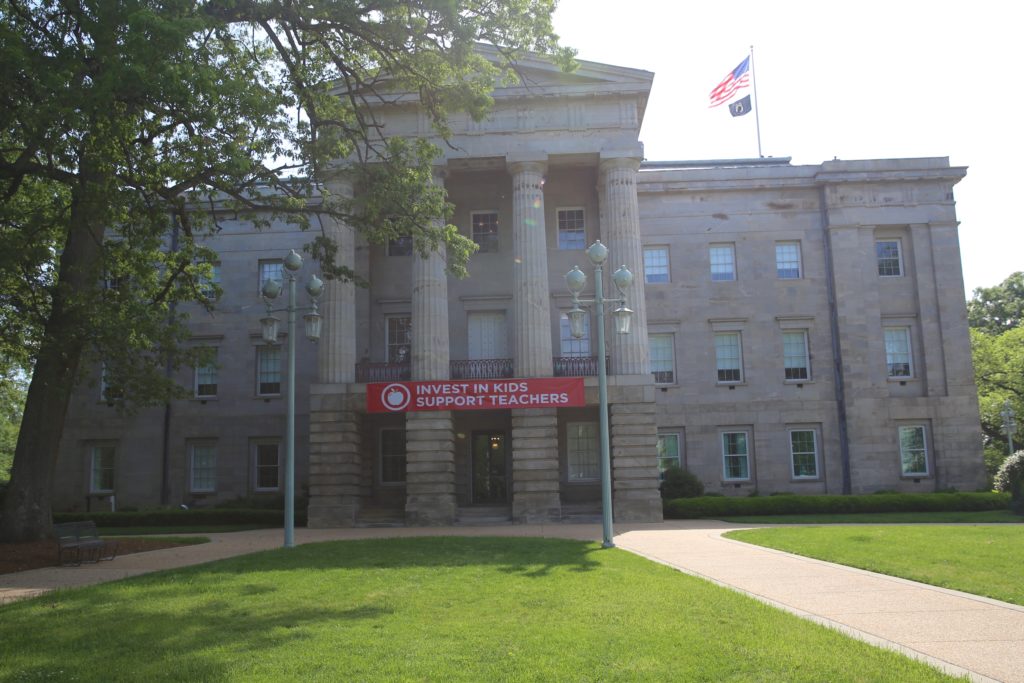 A banner backing the teacher walkout was attached to the west side of the Capitol. (CJ photo by Don Carrington)

“Educators are key to strong, safe communities. And you deserve support in the many roles you play,” Cooper said in prepared remarks.

“That means significantly better pay for all teachers and principals, including our veteran teachers and support staff. It means more school support staff like nurses and counselors. It means modern, safe classrooms. And it means respecting your work and treating you like the professionals you are. …

“And that’s why you’re here today to push for Medicaid expansion. To make sure families have health care coverage, including badly needed access to mental health treatment. More mental health coverage will keep us healthier and safer.”

A news release from Senate leader Phil Berger, R-Rockingham, says just 18 requests came in to meet with Republican senators during the event.

“Of the thousands of people who will be here, hardly any scheduled meetings with legislators,” Sen. Ralph Hise, R-Mitchell, said in the news release. “This is not advocacy. This is not a ‘work day.’ This is a political rally for Democrats that’s keeping nearly one million kids out of school,”

More than 30 school districts closed May 1 so that teachers could participate in the NCAE sponsored event, keeping a majority of North Carolina’s public school children out of the classroom for the day. But rally-goers contend the event is for the children, and walking out of the classroom is needed to get legislators’ attention.

“I want them to understand that every time they make a cut in some department, that it has a trickling effect, and it affects many different things,” said Betty Greene, a science high school teacher from Wilson County School District. “Where they see a slight savings it actually goes all the way down to the elementary level and affects our kids.”

Greene said teachers know what’s needed in their classrooms, and legislators need to hear their concerns. 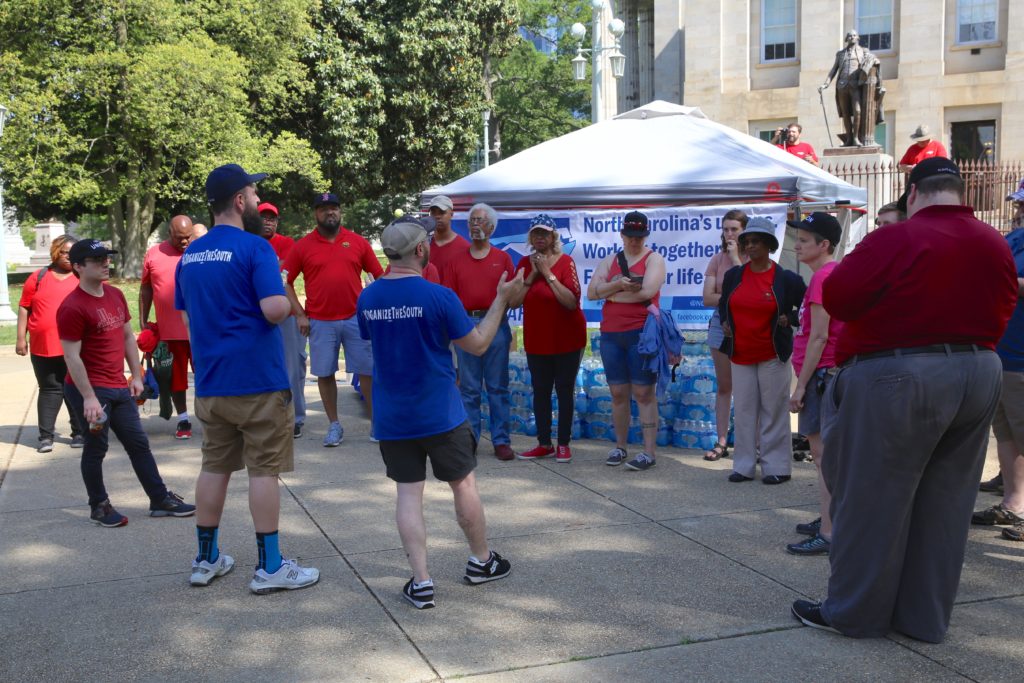 North Carolina is a right-to-work state, where public sector collective bargaining is prohibited. The state doesn’t have an official teachers’ union, but the NCAE operates similar to one. It wants to end that prohibition.

“I want to see [teachers] have a right to collective bargain,” said a rally attendee who gave his name as John Smith. “That’s a law that definitely needs to be changed. It basically equates to slavery. They are trapped.”

On April 24, NCAE President Mark Jewell spoke in favor of a bill that would allow public-sector collective bargaining. Senate Bill 575, introduced by Democratic senators, would allow more than 600,000 public employees to participate in union activity, though striking would still be illegal. 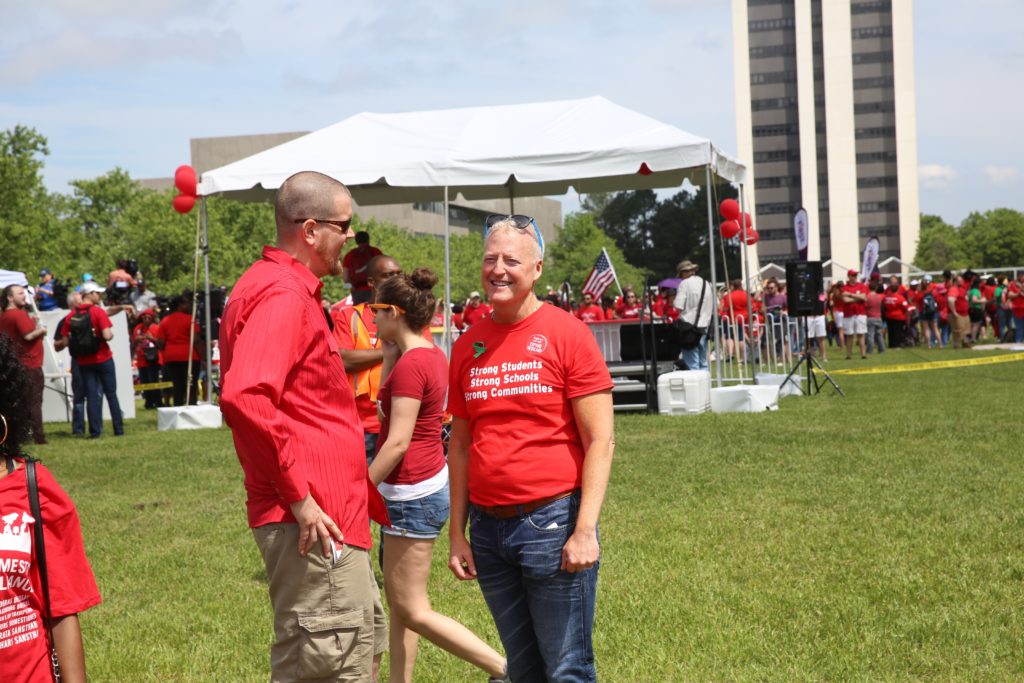 One of the few demands the NCAE may gain is restoring master degree pay for teachers. A few days before the march, the House unveiled its budget proposal, which included bringing back higher pay for teachers who earn master’s degrees for a subject they teach.

The budget proposal also includes an average 4.8% increase in teacher pay, 6.3% raise for assistant principals, and a 10% raise for principals. Non-certified school staff will get a 1% pay raise or $500, whichever is greater.

Whether the May 1 rally actually accomplishes anything tangible remains to be seen, Taylor said. 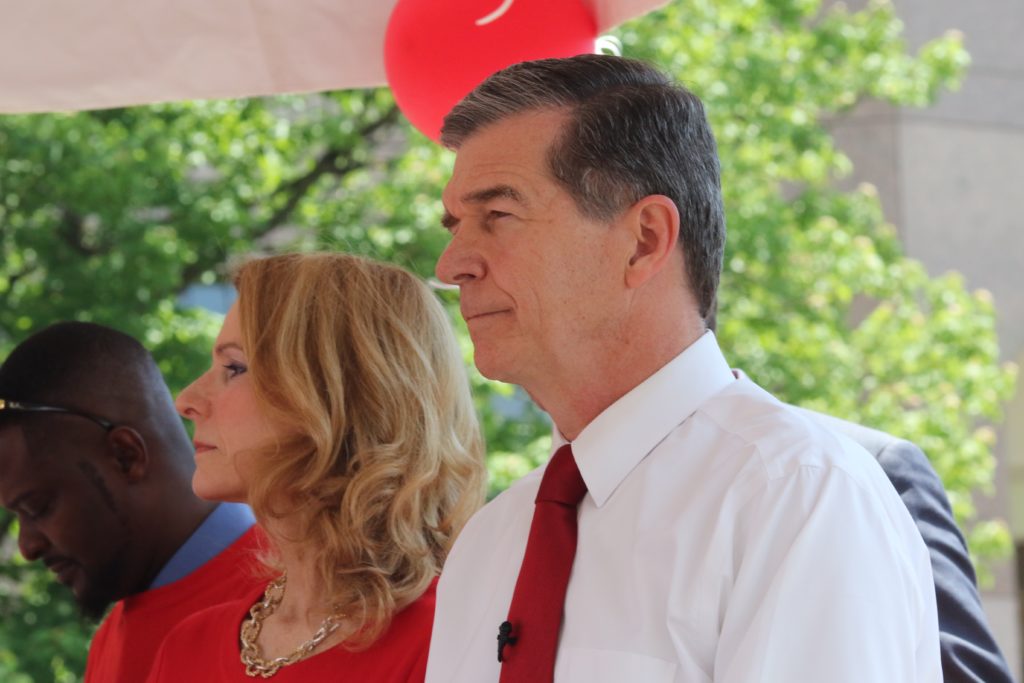 Gov. Roy Cooper, with First Lady Kristen Cooper at his side, urged teachers to continue their fight at the May 1 march on Raleigh. (CJ photo by Don Carrington)

Republican lawmakers have been quick to point out teacher pay raises over the past few years and increases in school security funding, but whether those things can be connected to last year’s teacher rally isn’t clear.

“Momentum is obviously in favor of the things that the marchers want anyways,” Taylor said. “That’s either because of them or just because of public opinion and status quo policy.”

Where does the march go from here? Taylor asks. One possibility is it continues as an annual event, with rally agenda expanding further — beyond educational demands.

“I think we’re getting to a stage where the teachers might go from being seen as a group that the vast majority of the public supports, understands what they’re going through, and believes they deserve more in terms of salary, staff support, textbooks to one where they see the teachers as part of an increasingly progressive interest group,” Taylor said.