For the first time in more than 20 years, Chef Felicia Daniel has no plans for autumn in North Carolina.

It’s a muggy, Friday afternoon on Aug. 7 when I phone Daniel, the operator of the N.C. State Fair’s popular Chef’s D’Lites concessions booth. She picks up on the second ring, and her voice lifts after I tell her why I’m calling. The pastry chef is giddy when talking about the fair. It’s her favorite time of year. For months in advance, she experiments in the kitchen, concocting deep-fried recipes to tempt hungry fairgoers. Her treats are greasy and decadent — the kind that make you crave an ice-cold lemonade to wash it all down.

“It is a lot of work,” she says, her voice conveying satisfaction.

North Carolina’s battle with coronavirus claimed another cultural casualty July 29 with the cancellation of the 2020 fair. The event, which would’ve spanned Oct. 15-25, has drawn 18 million attendees over the past decade. For many, its cancellation is understandable, but it remains a vast disappointment. The last time North Carolina called off its fair was World War II. N.C. State Agriculture Commissioner Steve Troxler says he considered every possible option, trying to ward off the inevitable.

Even in the best of years, events like this have been known to coincide with infection risks. In 2019, the N.C. Mountain State Fair, held in Fletcher, was tied to a Legionnaires outbreak. A hot tub display was the breeding ground for bacteria, news reports said. Ninety-four people were hospitalized. Four died.

Founded in 1853, the state fair has encountered its share of challenges over a run of nearly two centuries. Between 1861 and 1868, the fair was canceled due to the Civil War and reconstruction period. The state closed the fair again during World War II, between 1942 and 1945, reopening in 1946. In 2018, North Carolina’s brush with Hurricanes Florence and Michael caused a shutdown on the first day of the fair. Operations continued, however, for the remaining 10 days.

Amid COVID-19, other states have continued with fairs, adjusting events for social distancing or providing drive-through options. Delaware held its 2020 state fair from July 22 to Aug. 1. As of press time, state fairs in Kentucky and Maryland were ongoing. Georgia, South Carolina, and several other states were planning modified versions of their October extravaganzas.

But, in a packed environment where North Carolinians love to wander exhibits and stand in line for rides while devouring barbecue, ice cream, and roasted corn, there was no modified option that could possibly offer the same experience, Fair Manager Kent Yelverton told WRAL in July. There was “no halfway,” he said.

“The people. The lights. The rides. The smells. The music. All of that contributes to an atmosphere that can only be felt during the fair,” Yelverton said.

It’s a huge social loss, said Connie Chesner, a dedicated fairgoer from Winston-Salem. To her, browsing exhibit halls and talking with vendors “is like meeting neighbors you never knew you had, seeing talents you didn’t realize were right there. Just going to the fair instills stories of who you met, what you saw, what surprised you, and more.”

Chesner isn’t alone. Daniel, who is concerned about the spread of COVID-19, agrees with the decision to keep things closed. But without the fair, she feels a little adrift.

After my conversation with Daniel, I drive to the fairgrounds and park by the pond at the northwestern edge of the complex. Something about the emptiness needles me. I try to conjure visions of hubbub on the midway. The smoke from food trucks unfurling in a haze. The ringing of carnival games and the racket of rides. The scent of deep fried foods: funnel cake, Oreos, onions, mac and cheese, and every other concoction for which the fair is famous.

I’m trying to summon ghosts, I think, from a time before COVID-19.

Across the water, picnic tables sit empty beneath their wooden pavilion. I hear the occasional drone of a car on Trinity Road. Insects buzz. The echo of a hammer drifts from somewhere further afield. A handful of vendors are setting up for the Raleigh Market, for years known as the Raleigh Flea Market. It’s reopening for the first time since March.

Chef’s D’Lites is a family business, Daniel told me. Decades ago, her uncle owned a Raleigh catering company, and his dream was to have a concessions stand at the fair. It took 11 years, but he earned a spot on the grounds. Daniel, who lives in Greensboro, traveled to Raleigh to help. Gradually, she took over, making the stand her own. Fried food is her specialty, and she loves to experiment. Her mac-and-cheese balls are a hit. So is her famous “Chickenator,” a luscious combination of fried chicken, bacon, and pepper jack cheese wedged between the sticky halves of a cinnamon roll. Daniel drizzles the concoction with a combination of sriracha and honey. 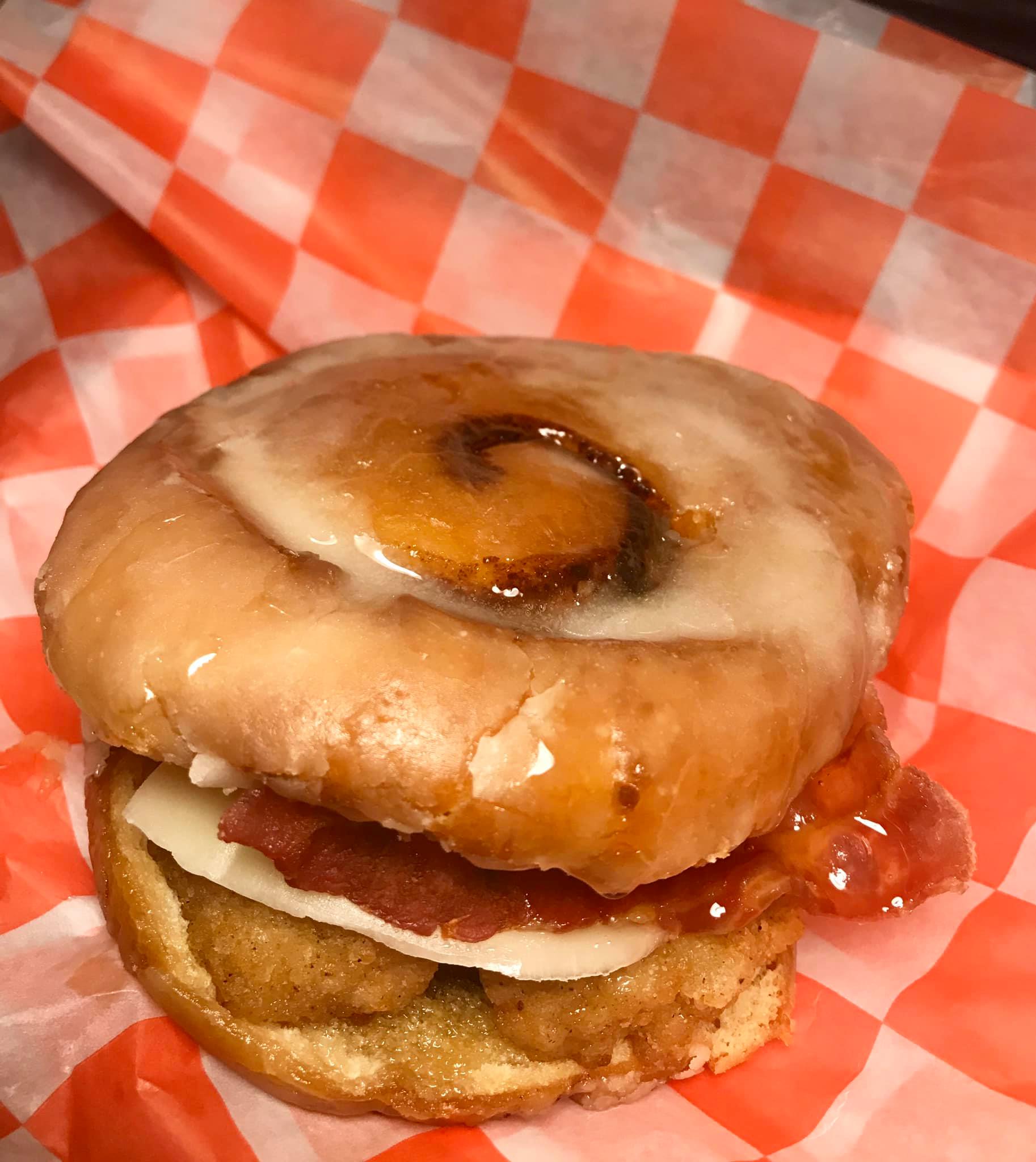 The treat made headlines during the 2019 state fair. It’s a point of pride and accomplishment for Daniel.

A favorite part of the extravaganza, Daniel says, is seeing regulars line up for their favorite treats. She’s got a fan club. People who show up just to see her. But she counts herself especially lucky when first timers appear at her window. If you’ve never had her fried food, Daniel said, she makes you a sampler. Savory deep fried Cuban rolls. Deep fried cream cheese cinnamon rolls. She’s even featured a “crack-n-cheese waffle cone” filled with mac and cheese, turkey barbecue, turkey cracklings, and coleslaw.

“I love watching people take that first bite, eyes closed, rocking side to side,” she says.

“I will miss my fair family,” she says when I ask her about the biggest emotional loss of the fair. “We always say we’re the ‘dysfunctional fair family.’ To know we’re not going to see each other is hard.”

Daniel’s words stick with me during the following weeks as I talk with more fairgoers, seeking out anecdotes of what people will miss this year. The event is so prone to traffic jams along the highway, to crowds, to lines, to headaches, I think, that perhaps this year off might be a relief to some.

But people who love the state fair really love it, I find.

Jennifer Wood Hopp, a human resources director from Fuquay-Varina, attends the fair about three times every year. She relishes the experience for herself, and for her 8-year-old son.

“It’s something I’m connected to from growing up,” she told me during an Aug. 17 phone call. Her parents always brought her to the fair when she was little. She never stopped going. “The sounds, the smells. I just like the atmosphere.”

Hopp speaks fondly of roasted corn on the cob, of hot doughnuts, of hand-cut fries sprinkled with salt and vinegar. She recalls the warm, musky scent of farm animals. Talking of the fair makes her long for the sounds on the midway, popping, humming echoes from the games and rides. Her love affair with the event has changed year-to-year. As a child, she lived for the carnival rides. Now, she laughs, she and her husband mostly attend for the food.

“I just like to wander and look at everything,” she says. “It’s still part of the whole experience.”

“Fortunately, I didn’t have an ambulance ride that time,” he said, “but I did get an Uber to take me home. I wasn’t feeling that great. Did I learn my lesson?”

Not in the least. In 2018, Johnson attended 10 days of the fair, his personal record. This year, what he’ll miss most is the opportunity to go. The fair is a tradition. A capstone to summer, an introduction to autumn.

“The fair is a place where I seem to feel more carefree without any stresses to worry about!” Johnson wrote. “I’ll miss seeing many of the people (including some of the workers) I’ve seen over the years. I’ll miss the entire experience.”

Hopp shares that melancholy. She wasn’t surprised when the fair was canceled. But she was holding out “a glimmer of hope,” she says.

“I was really sad, because to me it puts a cherry on the dumpster fire of this year.”

“It broke my heart.”

I drive back to the fairgrounds Aug. 17, park my car next to the Jim Graham Building, and walk the sprawling complex from end to end. Without activity from the Raleigh Market — it’s closed during the week — the silence is eerie. A brittle leaf scrapes the pavement. The wind gusts occasionally between buildings. A crow screeches from atop the J.S. Dorton Arena. My footsteps are loud to my own ears.

I pause near the Sam Rand Grandstand, in the spot where Daniel and her Chef’s D’Lites usually draw crowds. I draw a breath, hoping for phantom scents of her cooking. But the air, dense with humidity, smells only like asphalt and earth. I walk south, past the Dorton arena, toward the lot where the State Fair SkyGazer, North America’s largest traveling Ferris wheel, stood in 2019. Today, it’s nothing but a cement yard, fenced in against Hillsborough Street. Cars roar past. I feel exposed against the wide open spaces and graying sky, so I turn my path again to the more secluded northwestern corner of the complex. I trudge the wooded pathway along the pond, disturbing a cranky flock of Canada geese. 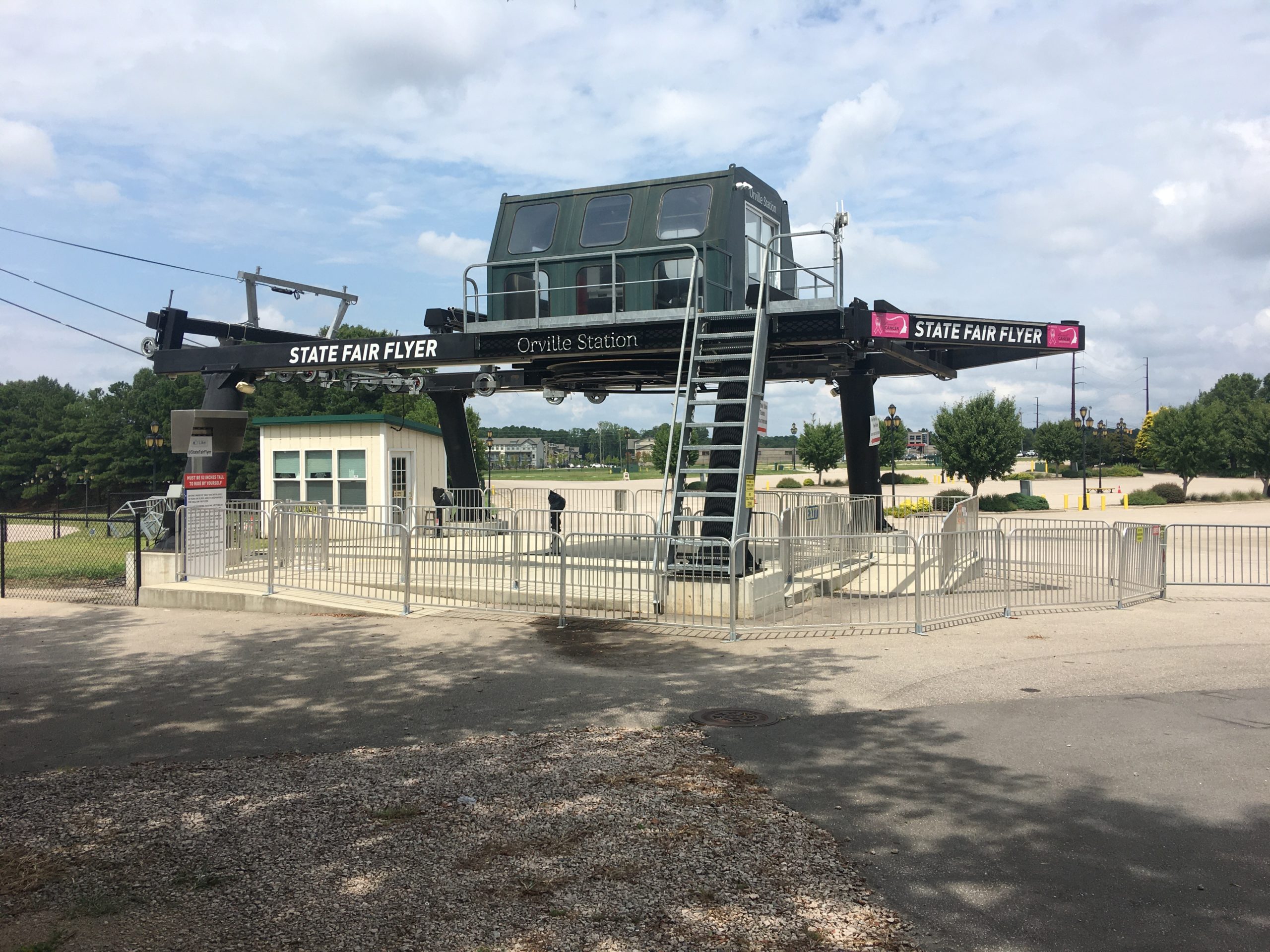 The State Fair Flyer, added to the fairgrounds in 2016, provides a 40-foot-high sky lift for fairgoers who want full view of the midway and surrounding grounds. This year, it will remain empty and silent. (CJ Photo)

The walk transports me back to a dusky October evening at the fair in 2015. I was in this spot, carrying a dripping plate of powder-topped funnel cake, sweating slightly in the unseasonably warm air. I was happy, lighthearted.

It’s a stark contrast to 2020, where COVID-19 has drained so much from North Carolina and its residents.

The fair would’ve been a reprieve for Johnson, who’s had an otherwise horrendous year. He’s separated from family members. He’s lost his job amid the economic slump and COVID-19 shutdowns.

“It’s been a hard and bitter pill to swallow,” he wrote. “I need to find something positive to do!”

During the summer and on Labor Day weekend, the fair hosted drive-thru options for fair food, giving fans a taste of some annual favorites. More of these events may happen later in the autumn, the state fair has said on its Facebook. Organizers usually post updates on Wednesdays.

But for now, all Johnson, Hopp, Chesner, and Daniel can do is look forward to next year’s fair — if it happens. Johnson will eat country ham biscuits, watch pig races, and go to the flower and garden show. Hopp will take her son on his favorite rides and buy doughnuts from Peachey’s Baking Co. Chesner will eat a spicy sausage and pepper sandwich and take a ride on the swings. Daniel will cook up her newest fried treat — probably a riff on her popular Cuban rolls and her Chickenator, she tells me.

The afternoon heat is closing in, so I turn my steps toward my car. It’s a long walk back, and I’m suddenly wishing for a state fair lemonade, full of fresh squeezed juice and gritty sugar.

Guess I’ll have to wait.

A crumbling republic? The rise, fall of separation of powers in N.C.