The current actions of the Democrat majority on the state Supreme Court, their liberal activist supporters, and the editorial writers of the state’s largest newspapers have made their position clear.

Hundreds of years of precedent, tradition, and the written code of judicial ethics do not apply to you if you are elected by the citizens of North Carolina to the state Supreme Court and you happen to be a Republican.

The latest proof comes from an unfounded attack on respected Republican Justice Phil Berger Jr. It comes from the News and Observer editorial page.

The writers attack Berger, elected to the state Court of Appeals in 2016 and the Supreme Court in 2020, for planning to attend a late October fundraiser for state Rep. Jimmy Dixon, R-Duplin. 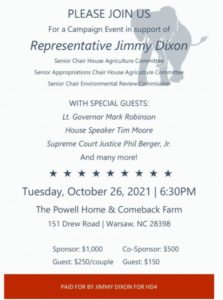 “That’s why it’s stunning to see Justice Berger listed among the ‘special guests’ on an invitation to an Oct. 26 fundraiser for the re-election of state Rep. Jimmy Dixon, a Republican representing Duplin and Onslow counties. The other featured guests are Lt. Gov. Mark Robinson and House Speaker Tim Moore, who, in his official capacity, is a defendant in the NAACP case,” wrote the News and Observer.

Stunning? Really? Candidates for the court routinely attend fundraisers for other candidates and are specifically allowed to do so by North Carolina’s Code of Judicial Conduct.

In less than 30 minutes, through public records requests, Carolina Journal confirmed that Phil Berger Jr. is considered a candidate for Supreme Court.

In a Jan. 22, 2021, letter, Carolyn Dubay, executive director of the North Carolina Judicial Standards Commission confirms that Berger has filed the proper paperwork to be a candidate for Supreme Court in 2028.  The letter confirms that Berger is considered a candidate under Canon 7A (1) of the North Carolina Code of Judicial Conduct.  It is a common practice for many justices to retain status as candidates throughout their elected service.

The News and Observer makes the claim:

“Unfortunately, there aren’t hard and fast restrictions. But there certainly are standards.”

This is misleading at best, intentionally wrong at worst.

The fact is Berger’s actions are specifically approved by Judicial Standards.

In a January 2020 memo to members of the judiciary, Judge Wanda Bryant spelled out rules for her colleagues. Bryant, a Democrat state Appeals Court judge, was chair of the Judicial Standards Commission at the time.

Judges and judicial candidates MAY:

Bryant herself followed that guidance when she was the guest of honor for her handpicked successor in January of 2020. 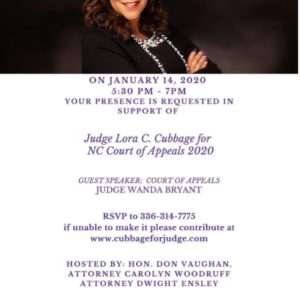 The liberal NC Policy Watch has determined that the same rules don’t apply to Berger, demanding punishment for him.

“Justice Berger’s action in this matter is unethical and ought to be the subject of an investigation and potential sanction.”

Again, the left-wing publication declares Berger to be unethical and demands an investigation, despite the fact the group that would investigate, the N.C. Judicial Standards Commission, has made it clear that his actions are 100% legal and ethical.

Carolina Journal was first to report about Supreme Court Democrats’ plans for an astonishing and unprecedented power grab that would overturn 200 years of case law and prior precedents. Democrat justices are preparing to disqualify and remove two duly elected Republican justices from a case so they can nullify voters’ decision to amend the state constitution.

In criticizing Berger’s planned attendance at the fundraiser, the News and Observer now claims:

“The court is right to consider whether it has the authority and can construct a method to disqualify Justice Berger in this case.”

Then this declaration from the News and Observer: “Any justice who participates in political fundraisers outside of their own campaign crosses the same line.”

In 2017 and 2018 Morgan was the guest of honor at political fundraising events for the NAACP, the plaintiffs in the case. The NAACP is trying to erase state constitutional amendments on voter ID and an income tax cap. Morgan declared himself a “life member” of the NAACP at these events.

On March 2, 2019. Earls was a guest of honor at an NAACP fundraiser. Earls was at this point raising money for the NAACP well after it had filed suit in NAACP v. Moore and after  Superior Court Judge Bryan Collins had issued a ruling in the case. It was virtually guaranteed this case was headed for the Supreme Court when Earls was raising money for the plaintiffs. One could argue that she was helping raise money to fund the lawsuit she would eventually see from the bench. Earls already has an extreme conflict of interest in the case, having previously been the attorney of record for the NAACP.

Lawyers for the legislative defendants in NAACP v. Moore have filed a motion opposing the forced removal of Berger and fellow GOP Justice Tamara Barringer. The motion pointed out that if the NAACP objection was really over a conflict of interest, why is there is not an effort to remove Earls, who was once the attorney for the plaintiffs, the NAACP?

But the News and Observer and NC Policy Watch won’t call for the recusals of Democrats Earls and Morgan, because they are liberals, and no rules or standards apply to them.

But following all the ethics rules for justices as codified in the N.C. Code of Judicial Conduct is not good enough for Justice Phil Berger Jr. because he is a registered Republican and holds a conservative judicial philosophy rooted in textualism and judicial restraint. And most importantly, they hate his dad.

The Woodshed, by investigative political analyst Dallas Woodhouse, is a unique blend of news and opinion based on his expertise and years of experience in North Carolina’s political trenches. For more follow him on Twitter at @DallasWoodhouse