As candidates for their respective offices, both Gov. Roy Cooper and Attorney General Josh Stein took bold stands defending electricity consumers from being made to pay for coal ash cleanup costs.

For the poorest among us, the cost of electricity commands a sizeable portion of their take-home pay. An electricity rate increase is highly regressive. Hiking these costs unnecessarily is certainly not something a conscientious public servant would tolerate.

Two settlement agreements later under Cooper and Stein, flabbergasted North Carolinians have to be wondering how come they’re now on the hook for nearly 90% of coal ash cleanup costs — which are projected to reach $9 billion.

On June 18, 2014, as the General Assembly was discussing the Coal Ash Management Act (CAMA), which would become law, then–Attorney General Cooper wrote a letter to Sen. Tom Apodaca voicing concerns about it. He wrote to “encourage the Legislature to prohibit the [Utilities] Commission from authorizing utility rate increases related to these [cleanup] costs.”

Further on he explained, “I realize this issue is complicated and that utilities are entitled to reasonable cost recovery in most instances. However, in this situation it is better to come down on the side of the consumer.” 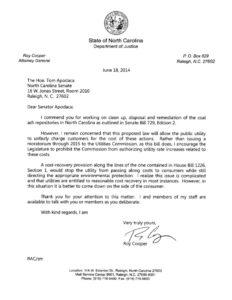 Stein, meanwhile, generated headlines in July 2018 when he filed an appeal of the N.C. Utilities Commission’s decision to allow ratepayers to be charged for cleaning up the initial group of coal ash basins covered by CAMA. Stein also put up a petition for people to sign on his campaign web site under his image and the banner “YOU SHOULDN’T PAY FOR DUKE ENERGY’S COAL ASH MISMANAGEMENT.”

When the N.C. Supreme Court gave what Don van der Vaart called a “mixed ruling” in December, Stein declared it “a major win for electricity consumers on coal ash cleanup costs.” A month later, however, Stein agreed to settlement under which consumers, not shareholders, were stuck with about 75%  of the $4 billion in estimated cleanup costs.

As expensive as it will be to consumers who had been led to expect differently, Stein’s highly questionable decision to settle still couldn’t outdo the even worse decisions from the administration of Cooper.

First, in April 2019, Cooper’s Department of Environmental Quality suddenly decided that Duke should fully excavate and remove coal ash from the nine remaining basins. Till then DEQ had categorized those basins as “low risk.” DEQ made this decision despite scientific analysis showing no difference in health benefits from whichever closure method was chosen. Duke appealed. 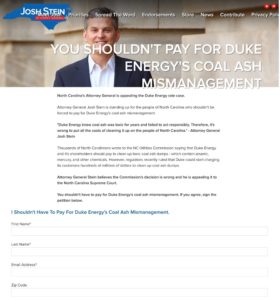 The issue was resolved on Dec. 31, 2019, in a settlement agreement between Duke, DEQ, and several environmental groups. Notice that consumers weren’t part of the agreement. It required full excavation of seven of the sites and partial excavation of the other two. Since excavation is much more expensive, the settlement resulted in significantly increased cost estimates for the coal-ash cleanup from $5.6 billion to $9 billion.

Critically, the language in the settlement agreement explicitly protected Duke’s shareholders by allowing the costs to be passed through to consumers. Media blaming Duke for that aspect seemed to forget that Duke had contested the Cooper administration’s order for the much more expensive excavation of the “low risk” sites. They also seemed to forget why Duke contested it: because it would unnecessarily leave “customers and communities burdened with billions in additional costs and decades of disruption.”

The Cooper administration forced those billions in additional costs, and only afterwards did it agree to settlement language that forced the burden of those billions on electricity customers.

State law recognizes that “the rates, services and operations” of electric power utilities are “affected with the public interest.” So state law on electric utilities demands “adequate, reliable and economical utility service to all of the citizens and residents of the State” as well as “the least cost mix of generation and demand-reduction measures which is achievable.”

In other words, electricity is so important to people that North Carolina law seeks to ensure that it’s as reliable and inexpensive as possible. It also must allow utilities to be profitable to a point, and the standard in law is this: “just and reasonable rates and charges.”

The N.C. Utilities Commission (NCUC) is the state agency who makes that call. The Cooper administration’s settlement agreement described the additional cleanup costs incurred by Duke to be “reasonable, prudent, in the public interest, and consistent with law,” which meant the NCUC could let Duke recover them through rate increases. Stein’s settlement agreement added several billion more on the backs of electricity customers.

This state’s motto is Esse Quam Videri, to be rather than to seem. Cooper and Stein certainly seemed to protect electricity consumers from unnecessary rate increases. But with two devastating settlement agreements, they’ve chosen to be something else entirely.

Jon Sanders is senior fellow of regulatory studies and research editor at the John Locke Foundation in Raleigh, North Carolina.