John Hancock is known for his sizeable signature etched on the Declaration of Independence. Nearly 250 years removed from his signing, almost everybody has been asked to offer their “John Hancock” on a document at some point in their life. It might be a myth that Hancock said, “There, King George will be able to read that without his spectacles,” but his point was made, forever etched in American lore. Hancock was a patriot and extremely wealthy. Along with his life, he had much to lose if the British Crown got its way. He had flaws like all the American founders, but Hancock’s courage remains a great example to those pushing back against today’s laundry list of tyrannies.

While extremely generous with charitable giving, Hancock despised taxes. “They have no right [the Crown] to put their hands in my pocket,” he quipped. It wasn’t just the concept of “no taxation without representation” that irked him, though. Hancock believed, too, that Congress and other elected officials could use taxes as a form of tyranny against the people. Still, as president of the Second Continental Congress, he used much of his wealth to help finance the American Revolution when it was in desperate need of supplies. As an import-exporter, he may have been the richest man in the colonies. In fact, most of his money was made from the colony’s close relationship to the British Crown. Yet, from the outset, Hancock wanted to play no part in their tyranny.

Nearly everything that’s happening in the political culture today should reorient us toward first principles and possess spirit and courage like Hancock. Whether it is the mob’s intent on canceling people for differing opinions, repackaged racism – and yes – I mean critical race theory – or economic plunder through endless tax and spending policies, we must have the courage to stand against it. After all, the entire theme and text of the Declaration of Independence is a reminder to put tyrants on notice. 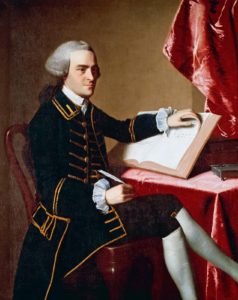 First, the Declaration of Independence reminds us that rights are inherent. Government is the servant and not the master of the people. Even a newborn child has more rights and importance than the government. They, too, are elevated above the whims and dictates of centralized power. Liberty is the birthright of Americans, a concept that sent shockwaves across Europe at the time.

Thomas Jefferson, a brilliant writer, gives the document a rat-a-tat cadence, reinforcing its authority and urgency. Soviet dissidents and other political prisoners under the heavy fist of Marxist-Leninism quoted the document in the gulags and work camps. “The founding fathers had seen, as the Declaration of Independence tells us, what a despotic government can do to its own people,” declared Ronald Reagan.

Hancock’s daring of King George to come and get him – and they tried – is a reminder to defend our founding principles, our Bill of Rights, and the American ideals that remain a source of hope for the billions who live under the dark forces of tyranny.

Don’t be afraid of the purveyors of tyranny. Don’t cower in fear to woke corporations and a corporate media culture that wants your voice silent – or at the very least –  that desires to divide America into separate ethnic groups or foment endless class conflict.

As Americans, we should always strive to live up to the ideals of the Declaration of Independence. It offers us the framework for equality and freedom unlike anywhere else in the world. Also, its high ideals reinforce to us we aren’t merely free because we choose our own representatives. Instead, we are reminded the government is implemented to secure the rights of the citizenry and when it fails in that core mission, it is no longer a worthy and valid government. Again and again, the human person and his or her destiny are placed above the government. And most of all, don’t ever be afraid to push back and channel a little John Hancock against the anti-American hysteria that has caused so many to lose their mind.

Cooper’s all in on critical race theory

We should be tellers of history and not judges

Things will never be the same: Reporting for NBC-17 in Raleigh in 2001