District Court Judge Pell Cooper of Rocky Mount thinks we got it wrong.

We’ll let you, and others, decide.

The judge, who’s the brother of Gov. Roy Cooper and has been on the bench since 1999, took issue with a recent Carolina Journal story by Don Carrington. It asserts that Pell Cooper’s role as the manager of three Limited Liability Companies likely puts him at odds with judicial ethics rules.

The rule in question is explained in this document, published by the UNC School of Government and part of the training all new judges (and, presumably, re-elected judges) are required to take. Last updated November 2016, it’s called “Tips For New Judges.”

We didn’t link to the document, and probably should have.

Rather than discussing his concerns with us — and goodness knows, he had plenty of opportunities to do so — the judge chose to air his grievances with his hometown newspaper, the Rocky Mount Telegram.

In a story the paper published, Cooper rebutted our concerns about judicial ethics and one entity he manages, Will Clark Properties LLC.

“It is a real estate investment that is solely owned by me, and the land is leased to a solar company,” Cooper said. “Limited liability companies are common in real estate holdings, and this is in compliance with the North Carolina Code of Judicial Conduct.”

Judge Cooper’s opinion may be right, but not everyone with expertise on the matter agrees — which is the main reason we pursued the story. A former judge who has extensive knowledge of the operations of the courts gave us the idea. The former judge approached us one day and found out we were looking into Judge Cooper’s management of the three LLCs. He said, in effect, Cooper can’t do that. The former judge said he had tried to set up an LLC to handle his own real estate and was told by a court official doing so would violate judicial ethics.

Three other former judges we spoke with said Cooper’s actions either deserved a formal investigation or sounded outright wrong.

We didn’t attribute that information to any of those judges because we didn’t have permission to use a direct quote. Still, the story could have made clear we didn’t invent the notion that something about the LLCs looked improper.

Is real estate hosting a solar farm and generating rental income a business? Judge Cooper thinks it isn’t. Other judges say it is.

Also, the annual report form Judge Cooper files with the secretary of state’s office asks for a “Description of the nature of business,” and the form states “real property.”

Again, Judge Cooper doesn’t consider his LLC a business. The official documents suggest it may be. 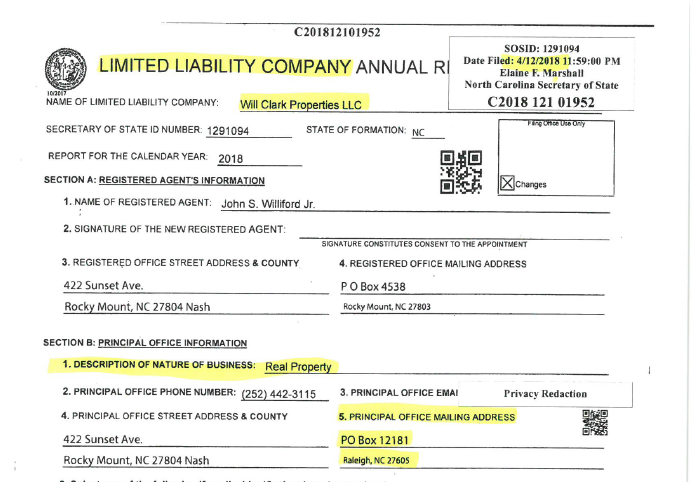 Perhaps the Judicial Standards Commission will settle the matter.

Again, we didn’t make this up. A neighbor pointed us to the current Mr. Clark as we were reporting a story published in March. We even observed Mr. Clark driving on the Will Clark Properties parcel during a visit to the area. Mr. Clark wouldn’t speak to us when we tried to reach him, either.

We regret failing to nail down the identity of Will Clark and for not attributing our reporting about Judge Cooper and the LLCs to those retired judges. We always try to get things right and this didn’t live up to our high standards.

Of course, Judge Cooper could have set the record straight if he’d decided to speak with us before going to the Telegram. Carrington had him on the phone, and Cooper hung up. Cooper also refused to respond to follow-up requests to discuss the matter.

Public officials like Judge Cooper may not want to make journalists’ jobs easier. But at least they can make sure we portray their side of a story accurately. Just talk to us. Or respond to an email.

We’ll be happy to chat.