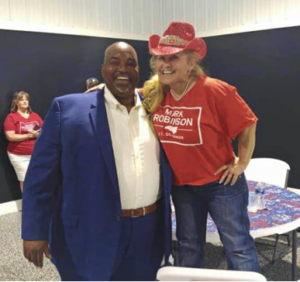 She is tiny in frame, only 4 feet, 8 inches tall, but Sherry-Lynn Womack, a Lee County School board member who is starting her second term, is standing tall against a liberal driven backlash for exercising her First Amendment rights. Womack attended the Jan. 6, 2021 Trump rally in Washington, D.C.

Womack, a retired Lt. Colonel in the Army, spent 33 years defending those rights for herself and others and is facing a firestorm for attending the event despite not taking part in any efforts to storm the Capitol.

“I went to support the president and all the good things I feel like he has done for our country,” said Womack in an interview with Carolina Journal.

Womack is a long-time Republican activist, known for her engaging personality and colorful outfits.

Her husband Jim is the longtime GOP Chair in Lee County. Womack said part of attending the rally was to call attention to the need for voter I.D. and other reforms to make future elections more transparent, in part to “restore faith in our electoral processes.”

“This may not be the last election we have during a pandemic; we have to take a look as lessons learned, and restore faith in our elections for the future,” delcared Womack.

Real time photos posted by Womack show her attending the event near the Washington Ellipse, between the White House and the Washington Monument, 1.5 miles from the U.S. Capitol. Womack and other Lee County residents were in Virginia at a mall when the Capitol was breached.

But before she left Womack spoke to a reporter for the USA Today and was identified as a member of the Lee County School Board in Sanford.

“I’m not one of those conspiracy theorists,” she said, citing what she called suspicious videos from Georgia. “But these are legitimate questions that need to be asked.”

According to the News and Observer, On Jan. 12, the Lee County board voted 5-2 to have its attorney investigate whether Womack violated policy.

The vote came after an hour where Superintendent Andy Bryan read submitted comments, nearly all of them negative, and some from students. More than 5o criticized her for aligning herself with election fraud accusations and gathering in a large group without a mask.

“Ms. Womack would not recognize the truth if it were flying alongside the Confederate flag that was carried through the Capitol,” said Linda Rhodes in comments the superintendent read aloud, as reported by the N & O.  “Her motives have no place in the truth. She aligns herself with a dangerous group that incited violence, killed a Capitol police officer and terrorized members.”

WRAL and WTVD also reported on the controversy.

“I am currently listening to the meeting. I expected to hear public comments from  parents and teachers. I find it very odd that the students who wrote concerning Mrs Womack appear to be only from Lee County High School.

“How many students truly pay attention to the current events unfolding? My question is were these students prompted or encouraged by their teachers?

” It appears their comments are very similar in structure and in the way written.

Mrs. Womack was elected by Lee County Citizens. She has the right to peacefully assemble. “

“It’s a shame you guys chose to cherry pick supposed comments from misinformed residents regarding Mrs. Sherry Womack in another attempt to silence conservative voices. Mrs. Womack has the same God given and constitutionally protected rights as we all do. Simply being in D.C. on the day a small group of people illegally entered the Capitol Building is in no way a crime or grounds to ignore the voices of the people who made their choice during the last election and re-elected Mrs. Womack.”

Womack was the top vote getter in November’s Lee County Board of Education elections, despite the county having a majority Democrat registration. Her two campaigns have been focused on improving transparency, accountability, and performance of the school system, no matter who’s toes she steps on.

“Our students and teachers are better than our proficiency scores and our School Report Cards reflect,” said Womack before the 2020 election. For too long our public school system has failed to tap the performance potential among our students and teachers. Our failure to effectively manage and direct public education is causing substantial harm to our families and our local economy.”

“Our school system is anything but transparent, with backroom deals and mismanagement of money affirmed by recent financial audits,” added Womack. “School performance scores clearly demonstrate many of our non-state mandated programs are failing to achieve positive outcomes. Teachers are frustrated with a lack of quality instructional time and exorbitant testing. Parents are frustrated that their high school graduates have to be remediated at local community colleges before they can enroll in credit-bearing coursework there.”

Dr. Terry Stoops, director of the Center for Effective Education for the John Locke Foundation, said the effort to remove Womack is completely unfounded and outside of the law. He offered up a lengthy defense to Womack against the blowback of her actions:

“The horrifying events at the U.S. Capitol have led to the creation of an equally horrifying new offense: guilt by proximity. Lee County school officials have launched an investigation because she was near wrongdoing while exercising her First Amendment right to assemble peaceably.

“Her identification as a school board member is immaterial. Citizens do not forfeit their First Amendment rights when they are elected to office, nor should they refrain from exercising those rights freely. If our elected officials fear reprisal for the exercise of their First Amendment rights in the public square, then we will do irreparable harm to the offices they hold.

“Ms. Womack has had a distinguished tenure on the Lee County Board of Education. The outcry appears to be motivated by those who object to her political beliefs, rather than her commitment to the children of Lee County.”

Stoops added that it’s unlikely Womack will be removed over her politics. “It’s extremely difficult to remove a duly elected school board member from office unless they committed a crime. Given that there is no evidence that Ms. Womack broke the law, she will remain on the school board until she resigns or is voted out of office.”

“Then there is the witch hunt in Lee County, where the left hopes to destroy Sheri Lynn Womack for attending the rally in D.C. Not rioting, attending. Just attending.”

Womack, a retired lieutenant colonel, served in Iraq and Afghanistan.

“She was awarded the Bronze Star and the Combat Medical Badge,” Cooke says. “She has every right to exercise the five freedoms enshrined in the First Amendment of the Constitution she spent 33 years defending.

“Maybe this could be a teachable moment for those students who called for her resignation. Learn those five freedoms and pledge to protect them. Because one day it will be you.”