My family’s COVID-19 trials, offering lessons learned, and maybe a few for our governor

Last summer I volunteered with Wake Research, a national leader in clinical research, for the phase clinical trial to evaluate the safety and effectiveness of mRNA-1273, a vaccine against COVID-19 developed by Moderna.

As a type-1 diabetic (also referred to as juvenile diabetes) since age 18, and with a history of heart disease in my family, I was at somewhat high risk for complications from COVID-19.  I became aware of the COVID-19 trial because of my previous interest in clinical trials for new treatments and devices.

I was frustrated that I was able to have limited direct contact with my aging mother, despite living within walking distance of her. My wife, Christine, supported my decision to participate.

I also wanted to do something to help others. Like every other family, the pandemic has upended our family life and destroyed all sense of normalcy for our two sons, Jackson, 15, and Cooper, 12. Cooper particularly has a lot of anxiety surrounding the new abnormal. I wanted to show them that their dad was willing to step up and try to help others.

I was selected for the study, and my initial appointment was set for July 28. My appointment happened to me just one day after President Trump visited the Triangle to promote the Phase 4 Moderna trial. 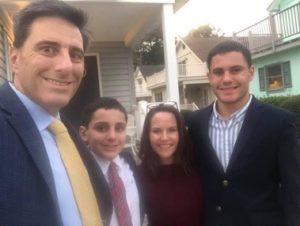 My study was blind. Neither I nor the researchers knew whether I received the real vaccine or a placebo. I signed up for a 24-month study. I was to be paid $1,800 for taking part in the study. I was given a debit card, and my first appointment earned me $90, as did the other in-person appointment. Phone appointments earned about $30.

I had no side effects from my first injection. None. This was concerning to me. I did not want to have a severe reaction to the vaccine, but having any reaction would have given me hope that I received the real deal, not sugar water.

I downloaded a phone app including a diary. At first, I filled this out daily, then weekly concerning any side effects, my health in general, and exposure to COVID-19. If I forgot, the phone reminded me. If I still forgot, I got calls from the researchers.

On Aug. 27, one month after my first injection, I was tested for COVID-19 again. I had my blood taken and received my second injection.

This time I did have some side effects, including a sore arm and mild nausea for a couple of days. But at the time I thought, “Is this real? Or is this all in your head?”

Now, of course, I know that the side effects, as mild as they were, did exist.

Several weeks later I went back in for another appointment, where the researchers drew my blood. I knew enough about the vaccine that this appointment allowed them to test my blood for the antibodies to see if the vaccine worked. They, understandably, could not tell me the answer.

But nothing in the study rules kept me from seeking the answers in another way. I made an appointment Sept. 28 with my personal physician for a COVID-19 antibody test. Most people test for the antibodies because they had COVID-19 but never displayed symptoms or developed antibodies because of exposure and never were infected with the disease. When I tested positive, I knew it was because I had in fact received the real vaccine. What a relief.

Both of my sons are in private schools and, except for a few days here and there, have been receiving excellent in-person instruction with amazing attention to COVID-19 protocols. Cooper has attended Fletcher Academy in Raleigh for several years. My oldest, Jackson, began attending North Raleigh Christian Academy this year when it became clear that his freshman year in high school would likely be entirely online if he stayed in the Wake County Public Schools. We did not find this acceptable. Moving to NRCA gave Jackson the added benefit of him continuing football.

Jackson and Cooper finished school Dec. 18. Our church followed Gov. Roy Cooper’s urging and canceled all planned socially distanced Christmas services. For the week before Christmas, my family had little contact with the outside world. The one exception was when we gathered with my mother and Christine’s parents for Christmas.

On Dec. 26, we left for my mother’s vacation home in North Myrtle Beach. On Dec. 27, Jackson began four days of intense tackle football, competing in his sixth Offense-Defense All American Bowl Week.

Unlike all our previous trips, we weren’t staying at the official hotel, but rather at my mother’s home.

Several good friends attended Jackson’s final game Dec. 30. My beach house neighbor Donnie traveled from his home in Greenville, South Carolina, just to watch Jackson play. My friends John and Amy caught the first ferry off Bald Head Island and drove down. My former pastor, who happened to be in town, attended.

Jackson played well. His team won, and he had a key fumble recovery.

We practiced social distancing at the game and ate lunch together afterward. Jackson was really tired that evening and did not seem to feel great. After four days of intense tackle football, that wasn’t a shock.

The next morning, on New Year’s Eve, Jackson and I left for Jacksonville, Florida, at 4 a.m. to watch N.C. State play in the Gator Bowl.

Jackson tested positive the next day

Jackson slept the entire drive down, but that wasn’t unexpected. However, he went back to sleep when we arrived. Knowing Jackson’s energy, that seemed odd. I felt his forehead, and he was burning up. I finally found a pediatric clinic open at night. By early evening the test confirmed Jackson had COVID-19.

I called my wife and urged her and my younger son to get tested. I called my mom, my in-laws, and those who attended the game with us. I also contacted Offense-Defense and let them know so they could be on the lookout for other players and football coaches testing positive.

As bad as 2020 had been, on the last day of the year, it felt like it was getting worse, but not without one final kick in the teeth.

With Jackson sick and not knowing about my wife and younger son, there was no point in us leaving Jacksonville. Jackson didn’t leave the room until we left late Jan. 2. Jackson had some mild coughing and fever. His symptoms were worse than a cold but less than the flu, the worst symptoms over in just a few days. He did have some lingering fatigue, but overall he was lucky.

Since I had been vaccinated, and seating at the Gator Bowl was extremely limited —socially distanced with required masks — I attended the game alone. To add insult to injury to the trip, my beloved Wolfpack lost to Kentucky 23-21.

My wife’s test was needed to determine the next route from Jacksonville. If, somehow, she and Cooper had not caught the virus, we would head back to the beach for Jackson to quarantine. But my wife did test positive. My youngest son did not, but he would catch the virus a few days later.

I was in constant contact with the football camp, and I was surprised that no other player or staffer ever reported a positive test. I assumed Jackson got it at football camp, but that appears wrong. We will never know where he contracted it.

My beach neighbor did test positive for the virus. His age and other factors put him at high risk. This caused me great concern.

My wife wasn’t in any particular high-risk category, but she is the love of my life. Any person who has ever met us will let you know I am the luckiest person on earth and that she is a saint. My friends always say I “married up” and “out kicked my coverage.” All of this is true.

My wife had a couple days of fever and severe congestion. Her fatigue lasted for a week to 10 days. She was a real trooper.

Donnie had a rough go. He caught pneumonia along with COVID-19. He was hospitalized for four days in Myrtle Beach before recovering a few days later. I believe sound medical care, early intervention, and lots of prayers pulled him through.

My son Cooper was the last to catch it. His symptoms, including congestion and fever, were also mild but lingered. He was only able to return to school for the final week of January.

I was told at my unmasking appointment to expect the need for a booster injection in about a year. This was just before Moderna announced that the booster might be needed for a new variant of the virus. Overall, I have been told that my immunity should be good for a year. My wife, who contracted the virus, may be immune for only four to six months. She is planning on getting vaccinated sometime later this year after the vaccine will be widely available and all at-risk populations have been served.

A couple of final thoughts

Clearly the vaccine worked for me. I was in close contact with the virus for weeks and was protected. I hope as many people as possible will get the vaccine.

I still use a mask, follow the three W’s, and mostly act as I did before I was vaccinated. It helps put others at ease.

I am glad I took the leap and volunteered for the trial. It’s nice to know you may have made a little difference in making things better.

I am still very much on the fence about ever requiring children to be vaccinated against COVID-19. While I believe the vaccines are extremely safe, we are just now testing the vaccines on our youth. Based on the mild symptoms my children experienced, would I vaccinate my children? I think so. Yet I can understand others making a different decision. I’m not sure it’s good public policy to require children to be vaccinated against a virus that is of little risk to them, when those who are at risk can themselves be vaccinated. But this issue will develop over time.

Often what you think may not be true. I assumed in the beginning that Jackson must have been exposed at the football camp. That proved false. Unless you catch it directly from a close family member or friend, often it’s a guessing game.

The people of North Carolina deserve better from Cooper and the state of North Carolina. If the government would get out of the way and let our private medical industry handle the vaccine distribution, I think we would all be better off. The governor and health secretary Dr. Mandy Cohen had 10 months to develop a plan. Canceling thousands of people’s vaccine appointments is unforgivable. This is the ultimate in central unplanning. It might make some sense to give half of the vaccines to at-risk populations and the other half to anybody at random. Clearly the paperwork of choosing who gets the vaccine is holding things up. We simply need to vaccinate as many people as quickly as possible while more vaccine doses are being manufactured. But as almost always, less government, not more, would help.

Is college football the death knell for COVID hysteria?

NAACP wants felons to vote, while nullifying your ballot