N.C. DOT overspent in its rush to spend $670 million

The N.C. Department of Transportation has a cash shortfall. But not for the reasons department officials are giving.

They had a deliberate policy to spend cash with little regard for normal safeguards. The House Transportation Committee recommended a bill to provide $660 million in emergency funding so the department doesn’t lay off 500-600 workers and delay 900 projects. Management decisions, not weather-related costs or homeowner compensation as a result of illegal takings under the unconstitutional Map Act, created the crisis.

Last year, the General Assembly approved borrowing $300 million a year in Build N.C. Bonds for the next 10 years. Each bond issue would be contingent on having less than $1 billion in “average month-end cash balance for the first three months in the calendar year.” To reach that level, DOT pushed more projects through engineering and construction.

The June filing for the first $300 million of Build N.C. bonds reported DOT’s cash balance had reached $2.2 billion in June 2017, but was down to $1.9 billion by March 2018 and $1.0 billion by October 2018, and $400 million in December. Between March and December, the Highway Trust Fund loaned $1.1 billion to the Highway Fund to accelerate projects eligible for federal funds, compensate property owners, and other purposes. Not only did the filing not mention the Map Act, but firmly stated “none of the legal proceedings … will result in a material adverse effect on the financial condition of the HTF.” This may leave open the possibility of an effect on the Highway Fund, which would create an unstated effect on the HTF. 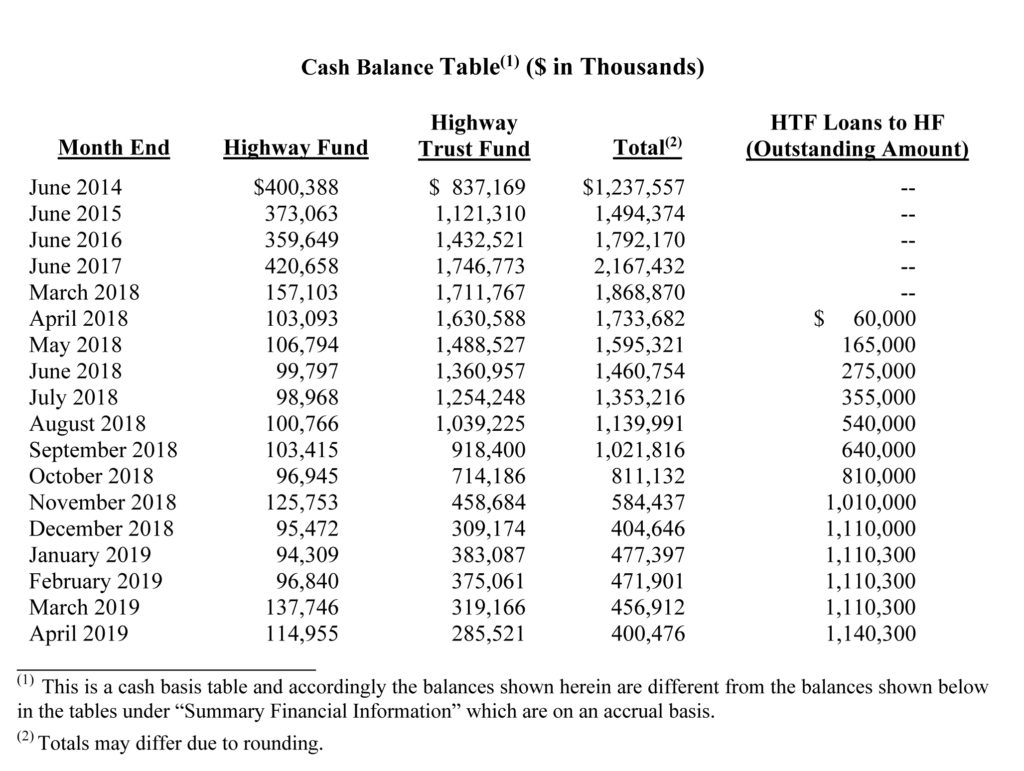 More immediately, despite the bond filing assurances, at nearly the same time DOT was seeking more debt, Chief Operating Officer Bobby Lewis was telling the Board of Transportation that Map Act cases could cost more than $1 billion. The Raleigh News and Observer reported the department had settled 360 cases, totaling $290 million as of July, 2019, with “260 cases still pending and others yet to be filed.”

In May, after DOT’s spending spree, OSBM awarded a $970,000 no-bid contract to McKinsey and Co. to review cash management at DOT and recommend a plan for project disbursements over the next five years. McKinsey’s report in September found that $670 million in cash spending was deliberate. 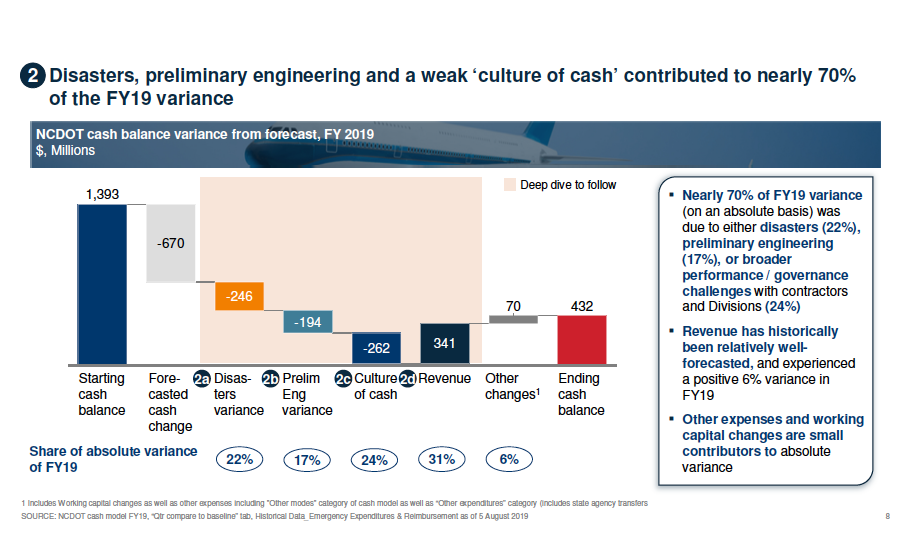 Every division overspent by somewhere between $12 million and $47 million in fiscal 2018-19 “after recent pressure to reduce cash balances.” This was a significant reversal from the large differences across divisions in the three years through fiscal 2016-17. Some divisions had managed to spend less than budgeted over that time, while the largest example of overspending averaged $7 million a year. 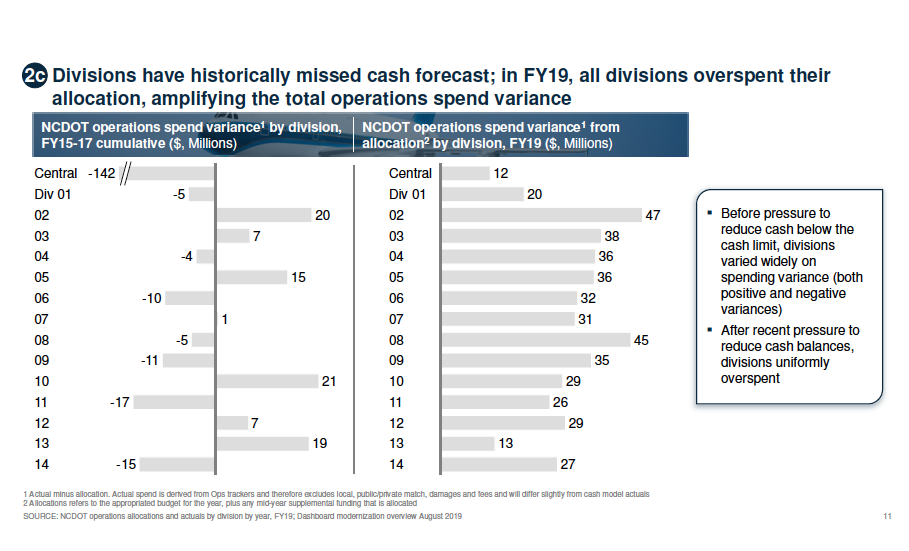 What about the weather events and Map Act spending that N.C. DOT publicly blamed? Spending in response to snow, ice, and hurricanes has been higher than budget every year since 2014, so it seems difficult to attribute the current shortfall to that. In addition, McKinsey stated that snow and ice expenditures “did not contribute to variance.” McKinsey did find an attributed $246 million in unexpected cash spending to weather because the state must spend before it can be reimbursed from the federal government. Even with that increase, revenue was $341 million over expectations, or $95 million more than the weather-related spending.

McKinsey did not mention the Map Act at all. 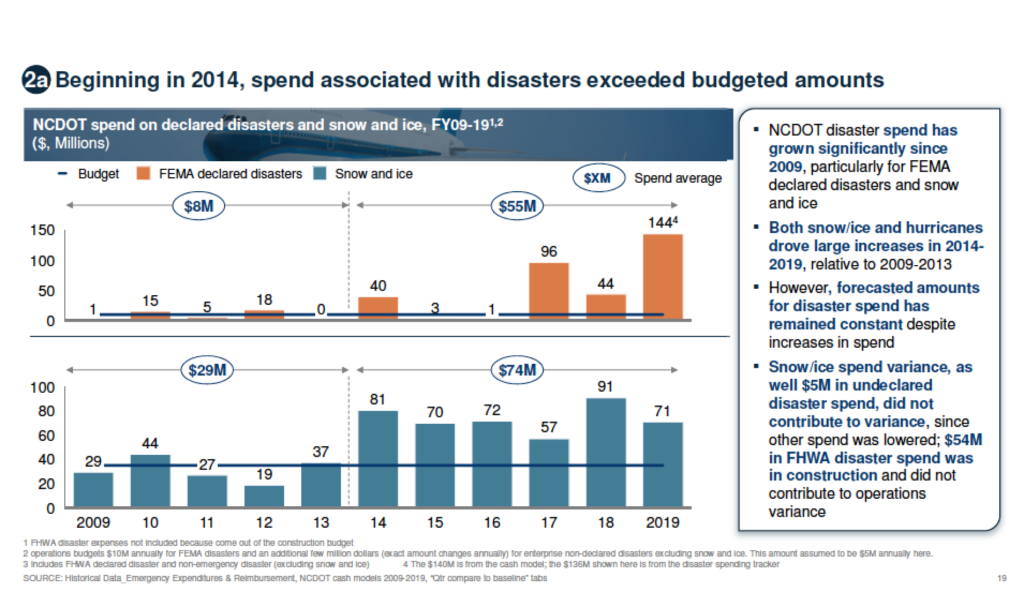 All of this indicates N.C. DOT was not surprised by payments it has known for years it would have to make since the Map Act was struck down. Nor should the hurricanes, snow, and ice have forced the agency to cut people and delay projects. Instead, it seems DOT’s rush to get $670 million of cash of its balance sheet so it could borrow $300 million in June led to $456 million in overspending that threatens the ability to get those projects done on time. It remains to legislators to determine if this rush to spend money justifies an unprecedented $660 million bailout from the Savings Reserve and the rest of state government.

Joe Coletti is a senior fellow who examines fiscal and tax policy at the John Locke Foundation.