North Carolinians can be proud of their history

When it comes to paying respect to some of the American giants in history today, there is no shortage of embarrassing headlines. In the Land of Lincoln, the city of Chicago is reevaluating some of their Abraham Lincoln and Ulysses S. Grant statues. Not to be outdone, in the state and a university named after George Washington, some are clamoring to remove a statue of our first president and America’s revolutionary hero at the University of Washington. One can laugh at the absurdity, but North Carolinians should be watching the attempt to disassemble history while simultaneously having the courage to take pride in their own state history.

After all, this month is the 61st anniversary of the start of the Greensboro sit-in movement that helped to propel the American Civil Rights movement. While North Carolina suffered under slavery and segregation for far too long, the courage of students from N.C. A&T State University transformed the trajectory of our state and nation. In large part because of black North Carolinians, the conscience of the nation was elevated during the post-war years.

Many are aware that North Carolina played a pivotal role in launching American Independence as well. The Halifax Resolves in April of 1776 empowered North Carolina’s delegates at the Continental Congress to declare independence and became a model to help prod other colonies to do the same. Kings Mountain and the Battle of Guilford Courthouse are just some of the military campaigns in North Carolina that helped doom colonial subjugation by the British. North Carolinians played a pivotal role, too, in making sure the Constitution enshrined a Bill of Rights within the supreme law of the United States. 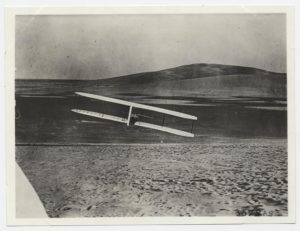 One of the reasons the Wright Brothers chose North Carolina to experiment with the first attempt at flight wasn’t just the favorable terrain, but because of the kindness of the Kitty Hawk weather station chief in responding to Wilbur Wright’s correspondence. Despite the federal government spending $50,000 in federal contracts on Samuel Langley’s attempt to create an aircraft, the Wright Brothers built a workable plane with $1,000. That included transportation costs from Ohio to North Carolina. North Carolina’s “First in Flight” moniker not only recognizes a pivotal event in world history but reflects the entrepreneurial culture of the state, as well.

In Asheville, the Veterans Affairs Medical Center is named after Charles George. In addition to the VA center, there is a bridge, a military base in South Korea, and a school gymnasium named after him. George, an Eastern Cherokee Tribe member, was killed in action while smothering a grenade to save the lives of his fellow Marines during the Korean War in 1952. “Although seriously wounded in this display of valor, he refrained from any outcry which would divulge the position of his companions,” reads a portion of George’s Medal of Honor citation.

Lawrence Joel, another North Carolina recipient of the Medal of Honor, is a name that should be widely known. Joel who grew up in extreme poverty in Winston Salem — so much so that he had to live with neighbors — became the first living black recipient of the Medal of Honor since the Spanish-American War. Joel’s heroic efforts to treat and save soldiers ambushed in Vietnam while wounded himself is an inspiration for the entire nation. In April of 1967, Winston Salem held its first-ever parade that honored a single individual when they paid tribute to Joel. He was the first medic to receive the Medal of Honor in Vietnam. Joel’s story is mentioned by actor and singer-songwriter Kris Kristofferson in the introduction to the Big & Rich song “8th of November.”

It’s impossible to cover all the good and bad of North Carolina history in a single piece, but the overall point is that while history is often nuanced and complicated, there is much to be proud of in one of the greatest states within the greatest nation in the world. “When the nation’s history is poorly taught in schools, ignored by the young, and proudly rejected by qualified elders, awareness of tradition consists of only in wanting to destroy it, wrote historian Jacques Barzun in his book “Dawn to Decadence.”

Many of the people intent on toppling or removing statues have little understanding of history. Yet, the destruction is appropriately symbolic for people who have lost a sense of purpose and sacrifice. North Carolinians would be wise to opt-out of the current madness while working to rediscover and champion its own history.

Stop submitting to the woke empire

The beauty of American diversity