The latest scheme to overturn voters’ will could set absurd precedents and irreparably harm our judicial system.

It would be outrageous.

It would be unprecedented.

It would damage the credibility and validity of North Carolina’s highest court for decades.

It would be nothing short of a bloodless coup d’état by the Democrat majority on the state Supreme Court that would bloody North Carolina’s judiciary for years to come.

It would be a lawless decision, driven solely by politics.

It is likely to happen.

In an astonishing and unprecedented power grab that will overturn 200 years of case law and prior precedents, Democrats on the state Supreme Court are preparing to disqualify and remove two duly-elected Republican Supreme Court justices from a case so they can nullify voters’ decision to amend the Constitution.

The case is NAACP v. Moore and the state Supreme Court’s Democrats are trying to remove two Republican members from the bench, so a new temporary four-to-one Democrat majority can erase two constitutional amendments – the cap on income tax, and the voter I.D. requirement – which were overwhelmingly passed by more than four million votes. 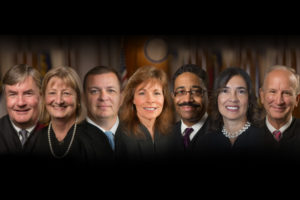 In a plan already underway, Democrats Anita Earls, Robin Hudson, and Mike Morgan would conspire to remove the justices while allowing Associate Justice Jimmy Ervin to vote AGAINST the move because he is the one Democrat currently on the court who will face re-election in 2022.

This is not just an inside-baseball rumor. It is in motion. On July 23, 2021, lawyers for the NAACP filed a motion to have two Republican members, Justice Tamara Barringer and Justice Phil Berger, Jr., both sitting members of the state Supreme Court, removed in the case.

The lawyers argue that they have a conflict of interest because Berger is the son of Senate Leader Phil Berger and Barringer was a lawmaker during the time these constitutional amendments passed the legislature by a 3/5ths majority.

The State of North Carolina filed a motion on behalf of the legislative defendants, opposing the forced removal of the justices. The motion pointed out that if their objection was really over a conflict of interest, why is there is not an effort to remove Earls, who was once the attorney for the plaintiffs, the NAACP?

How did we get to this point?

This fight began in August of 2018 when the N.C. Conference of the NAACP and Clean Air Carolina sued to block four proposed amendments passed by 3/5th of the General Assembly from being presented to voters for approval during the November 2018 election. The NAACP argued in part that the General Assembly itself was an unconstitutional “usurper body” which can’t propose constitutional amendments.

That effort failed, for the time being.

The amendments passed by wide margins, enshrining in the state Constitution a right to hunt and fish, expansion of the rights of crime victims, cuts the top income tax rate from 10 percent to 7 percent, and a requirement that voters present a state-approved photo identification to vote.

But measures restructuring the state board of elections and ethics enforcement and giving lawmakers more control over filling judicial vacancies lost by large margins.

Before the ink was dry on the election results, the NAACP filed a lawsuit. In February, Wake County Superior Court Judge Bryan Collins ruled in their favor, saying that the income tax cap and photo I.D. amendments were unconstitutional because, in his view, the legislators who placed it on the ballot were “usurpers,” elected illegally by “tainted” district maps.

“Thus, the unconstitutional racial gerrymander tainted the three-fifths majorities required by the state Constitution before an amendment proposal can be submitted to the people for a vote, breaking the requisite chain of popular sovereignty between North Carolina citizens and their representatives,” Collins wrote.

As a result, the constitutional amendments put on the ballot “were approved by a General Assembly that did not represent the people of North Carolina,” and were invalid, declared Collins.

“If there was a loss of popular sovereignty by our General Assembly, then all the laws passed by that body would be subject to attack, thus creating chaos and confusion,” COA Judge Chris Dillon wrote in the court’s primary opinion. “One might argue that our current state constitution, adopted in 1971, was void, as it was proposed by a General Assembly that had only one African-American member due to the impact of gerrymandering and voter suppression measures.”

The COA ruling results in an automatic appeal to the N.C. Supreme Court, but the NAACP then filed a motion to have two Republican justices of the Supreme Court removed in the case, and suddenly the court pulled the case from its calendar.

If the plan to remove Republican justices from this case works, it will mark a disturbing turning point in N.C.’s judicial history. In more than 200 years of existence N.C. Supreme Court justices have never forced one of their own off a case, until now. Normally recusals are left for the individual judges to decide, and service in the General Assembly is not cause for judges to recuse themselves or be removed.

The motion filed by the defendants’ lawyers said that “In this appeal, Plaintiff asks this Court to reverse the Court of Appeals and become the first court of review ever to find that a legislature lost its popular sovereignty and lacked the ability to pass legislation. The legislative acts at the center of the challenge are two proposed constitutional amendments that were later adopted in 2018 by the people of North Carolina.”

Should the Democrats on the Supreme Court remove the two GOP justices from the case and nullify the amendments passed by the citizens they will have nullified 9.6 MILLION legally cast votes.

Think about the absurdity of this plan. The NAACP v. Moore case is limited to the two amendments that were questioned. But the two amendments on the right to hunt and fish and for crime victims are at risk also. Under the precedent Democrats on the Supreme Court would set through this scheme, these constitutional amendments are equally invalid and can be challenged at any point at any time by anybody.

How can the court deem constitutional amendments that were directly approved by the citizens as invalid, but allow every other law passed solely by the legislature to stand? Criminals convicted under any laws altered in-between 2013-2022 will be suing to overturn their convictions for decades to come.

This plan is a clear political power play because Democrats are afraid of voter I.D. becoming a reality in N.C. The damage to our most treasured institutions would last for decades.

The Supreme Court is elected to decide cases, not decide WHO sits on the court. The voters do that.