Our long-gone Great War veterans and the free society

Frank Buckles, who passed away in 2011, was the last surviving American veteran of World War I. An ambulance driver on the Western front, Buckles lied about his age and enlisted at 16. His parents were born before the Civil War, and his mom delivered her last child, Frank, in her 40s.

After I graduated from college, I had the opportunity to talk with World War I veterans. While working for former U.S. Congressman Gene Taylor, we’d sometimes check in on those housed at the Naval Home in Gulfport, Mississippi. This was 2001-2002, and there were still a couple of veterans from the Great War on the grounds.

It didn’t seem possible that the type of men from still black and white photos inside those trenches could still be breathing. I supposed they were very different from us, forgotten and out of place in the 21st century. Yet, they sounded like us, and their jokes were funnier because their filter had long since disappeared. Still, I thought it was a little eerie talking to men, at least statistically speaking, who shouldn’t be alive.

Does anybody even still talk about the Great War?

I know they do because I took several classes on the subject and have read many books. One class I took championed the Lost Cause myth, meaning most surviving veterans were depressed about their service and blamed their leaders for the massive carnage. The working class was merely led to mass industrial slaughter by the ruling class is still a common refrain about the war.

Joining the conflict later — toward the end — many Americans had a much different experience. There is a great book titled “First Over There” that highlights the service of former U.S. Sen. Sam Ervin and Samuel I. Parker. The latter, born in Monroe, is the most decorated soldier of the Great War. Parker, like Ervin, left school at Carolina to join the first wave of American Doughboys headed for Europe. Both men experienced unspeakable carnage during America’s offensive campaigns but went on to great success back in North Carolina and for the nation. 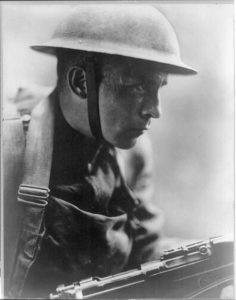 An American Doughboy in France.

The Americans fought so fiercely and savagely at Belleau Wood that the Germans bestowed upon the U.S. Marines their now famed “Devil Dog” nickname.” The moniker emerged from Germans sending dispatches back to their headquarters complaining about the Marines fighting like “hounds from hell.”

Those are the type of men America produced, and we should be proud of that legacy.

Of course, all the Great War veterans are gone now. Their sacrifice and service clash so well with the society of entitlement and the “me first” persona that pushes everybody down. A lot of men volunteered for a host of reasons, but mostly to serve their country when called upon.

World War I reminded the next generation that war requires real sacrifice, and we should never enter any conflict lightly. It was a dubious conflict for America to involve itself in. Still, it helped prepare for the realities of the next war that required freeing entire continents and ending two evil regimes.

Free societies require real sacrifice, which might explain why our culture struggles to cultivate and embody freedom today. Few are interested in those virtues where the politics of the day often promises us “free stuff,” promoting endless consumption and envy.

The haunting sounds of the “Last Post” bugle or “Flowers of the Forest” on the bagpipes forever remind us of the carnage of the Great War.

The Great War veterans are all gone, yet there are so many veterans around us today that we need to thank. Thousands of monuments and millions of graves testify to our freedoms, including many in Europe for the Doughboys who never made it home.

Ray Nothstine is opinion editor of Carolina Journal and a research fellow on Second Amendment issues at the John Locke Foundation.