Moved to action by a recently published study from UNC-Chapel Hill professor Andrew Reynolds, football coaches at colleges and universities across North Carolina — with a few exceptions — have asked the NCAA to dissolve their football programs and shift funding and resources to basketball.

The study ranked North Carolina’s college football programs at a lower level than those in North Korea and Cuba and slightly above those in Venezuela. (See graphic below.) 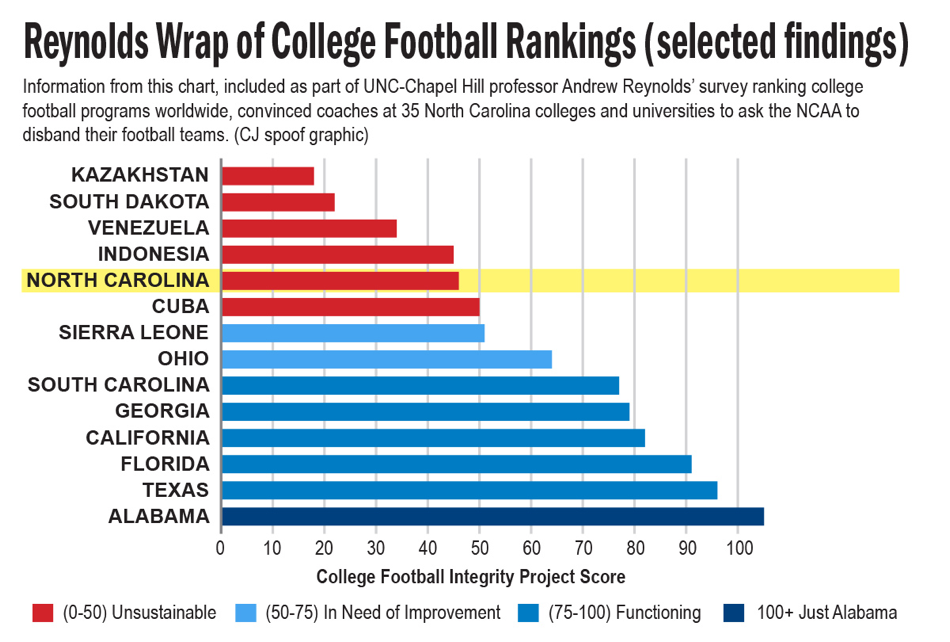 Reynolds told Carolina Journal he used the same statistical model for his college football study that he deployed with the controversial and widely publicized Electoral Integrity Project. EIP compared voting systems in U.S. states and countries around the world and concluded that “North Carolina’s overall electoral integrity score of 58/100 for the 2016 election places us alongside authoritarian states and pseudo-democracies like Cuba, Indonesia, and Sierra Leone.”

“It is hard to believe, but the model’s results cannot be questioned,” Reynolds said.

The NCAA immediately agreed to dissolve the football programs.

In a statement, NCAA President Mark Emmert said, “Since receiving the request from the coaches, and after careful consideration, we decided it prudent for the schools to drop these football programs. We spent at least 20 minutes looking into the matter, and that was sufficient. It was an obvious conclusion.”

Of the more than 40 head coaches for N.C. football programs attached to the NCAA on any of the three levels, more than 35 signed on to the request, including all Division I programs, with the exception of Appalachian State University.

The move to drop football is in some ways surprising, given that four North Carolina teams played in bowl games this year, including Appalachian State, and three of those teams — Wake Forest, N.C. State, and the Mountaineers — won. North Carolina lost by only two points to Stanford.

The schools dropping their programs are proud of their minor successes — “It’s great to go .500 and play in a bowl, but what counts are national championships,” one coach said.

“We would just not rather compete with teams from South Carolina. They’re just too good,” said the coach. “We did everything we could to win. We made lots of promises to high school kids who we wanted to play for us. Guess we just weren’t doing something right. We even got in trouble for those promises and some other things … and still. How does Clemson do it? I have no idea.”

“Furthermore, well, we just feel a little left out. Everybody loves basketball in this state, but football, not so much. We’re always left to feel like that last kid chosen to play kickball. Oh, people will take us, if they have no other choice. If a basketball game is available, well, just forget it.”

It’s unclear what the thousands of football players will do now, considering basketball rosters are mostly set. The basketball teams also must decide what to do with their additional scholarships.

“The move could force these students to turn their attention toward school and toward enrolling in actual, intensive, and substantive courses. And that would be a shame,” the coach told CJ.

For their part, basketball coaches were gleeful when considering the potential influx of talent and the offer of free rein around the state.

“We knew this was coming,” said one prominent basketball coach. “Bottom line, you have to win. And people have to give a crap about you, too. Football was just doomed.”

Parting Shot is a parody loosely based on items in the news. This parody was published in the February 2017 print edition of Carolina Journal.

Emergency powers reforms are a big win for North Carolinians

Thanksgiving in the trying times

Infrastructure bill did us no favors