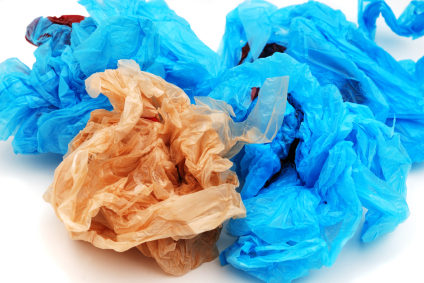 My family and I just spent a week at the beach — and found our big stack of reusable grocery and retail bags to be rather handy.

If you’ve ever taken a crowd to and from the beach, particularly if some are kids, you know exactly what I mean. There will be dirty clothes and linens that need to be packed separately from the clean ones. There will be stray knickknacks and bits of technology. There will be sand-coated flip-flops. There will be mysterious objects you don’t recognize but will be glared at for leaving behind or throwing out.

Thus having a stack of sturdy plastic bags, easy to snag and carry with a finger or two, is essential. The same is true for the traditional “we forgot something” trip to the store on the day you get to the beach. Carrying lots of different things in different bags is easier when they are plastic. And, of course, those bags then get added to your stack for reuse at the end of the trip.

Please pardon me for the lengthy exposition. But I wanted to illustrate how a “throwaway” consumer product, the plastic bag, can be of practical value. On a broader scale, it’s worth pointing out that plastic bags are cheaper than their paper counterparts. They don’t break as often, get weaker when they get wet, or facilitate infestations by roaches or other pests.

What about the environmental impact? The capacity to be recycled is only one consideration, and not typically the most important one. Often, the potential is never realized anyway – plenty of paper bags will end up in landfills, decomposing slowly if ever. More importantly, harvesting materials and then recycling them are both energy-intensive processes. A major reason why paper bags are more expensive than plastic ones is that it takes about 40 times as much energy to make and transport the paper ones.

During our recent beach trip, some of our plastic bags were brought back from stores on the island where we stayed. If we’d spent our summer vacation a bit further north, on the Outer Banks, it would have been illegal for island stores to send us home with those bags, thanks to a law enacted by the North Carolina General Assembly in 2009.

The stated goal of the original legislation was to cut down on visual clutter and damage to wildlife. But there doesn’t seem to have been much effect on either. A study by state environmental regulators found no significant difference in the number of discarded plastic bags that were recovered on Dare County beaches before and after the ban.

Defenders of the bag ban say that’s not surprising, because visitors could always get plastic bags on the mainland or bring them from home. But if the goal is to reduce litter, and a bag ban is the chosen means, their argument suggests a longer-term goal of banning plastic bags further inland. Otherwise, their position makes no sense.

Government certainly has a legitimate role in protecting human health, safety, and the environment. While people tend to take care of their own property, they may lack the knowledge or incentives necessary to keep from damaging air or water resources “in the commons” — those that can’t be protected by private owners, in other words. Thus some combination of regulation, litigation, and negotiation under government auspices will be necessary.

But any government action that limits the freedom of households and firms to transact business as they wish must pass a couple of basic tests. First, is there some less-coercive alternative that will do most or all of the trick? Second, do the benefits of the action exceed the costs?

North Carolina’s current ban on plastic bags on the Outer Banks fails these tests. The vast majority of consumers already dispose of their bags properly. Surely we can combat littering in a way other than depriving people of their freedom to choose — and depriving harried vacationers of their handy stack of travel aids.

John Hood is chairman of the John Locke Foundation and appears on the talk show “NC SPIN.” You can follow him @JohnHoodNC.