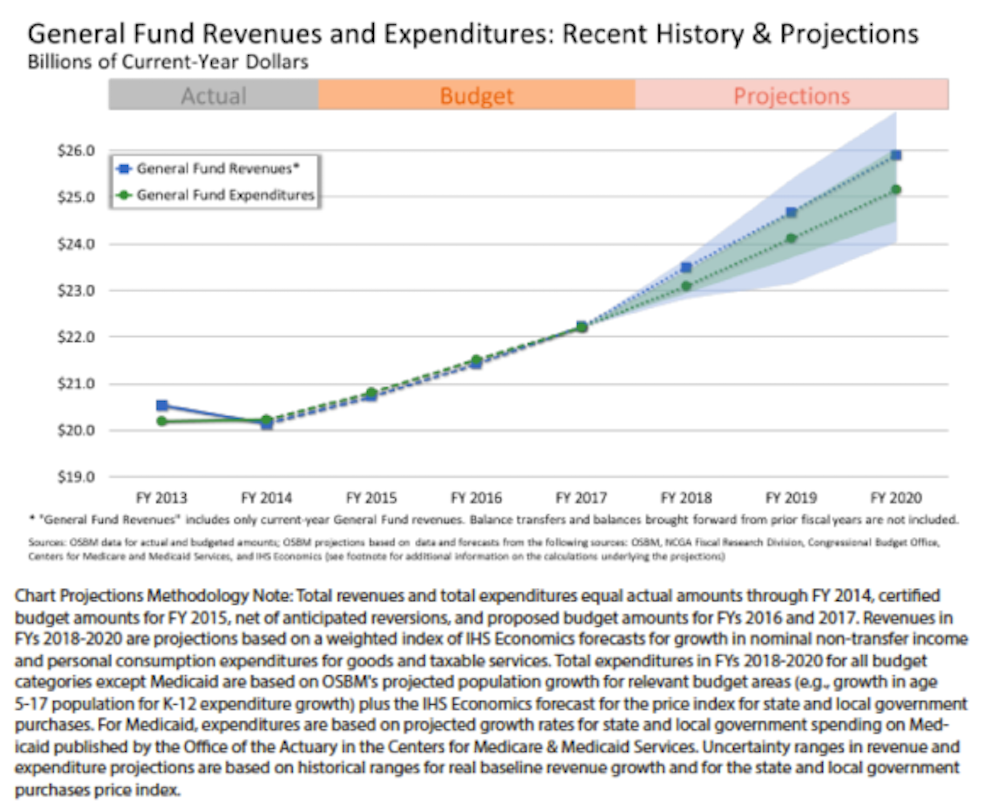 The Insider reported recently about a Fiscal Research Division analysis showing the Senate’s “Billion Dollar Middle Class Tax Cut” would lead to $600 million shortfalls in three of the next five years.

Fiscal staff started from the assumption that state government would do all the same things the same way, just for more people. With these assumptions, spending would increase 4 percent to 4.5 percent each year, not far above the combined rate of population growth and inflation.

Legislators have not shown a willingness to grow spending so quickly.

The current biennium (July 1, 2015 to June 30, 2017) has annual spending growth of 2.6 percent. If legislators kept this pace, there could be a $145 million (0.6 percent of revenue) shortfall in fiscal 2018-19, which could be easily addressed with part of a potential $300 million cash balance from the previous year. Surpluses would grow to $800 million in fiscal 2021-22, excluding year-to-year balance transfers.

The cause of this $1.4 billion swing in fiscal fitness is a small change in assumptions.

In its focus on services, Fiscal Research followed the methodology to create the previous starting point for budget preparation, the continuation budget. In 2013, legislators decided the starting point each year should be the money already committed on a recurring basis, not the programs. This small, technical change to the budget starting point, focusing, as most families and businesses do, on dollars spent instead of services rendered, is another procedural improvement that has made state budgeting better for taxpayers.

This difference also provides an excellent example of why five-year projections can receive support from progressives and conservatives alike. Those projections should include base budget, continuation budget, the biennial rate of growth, and constant per-capita spending adjusted for inflation. The revenue side should also include a range of estimates, including a risk of recession.

The North Carolina Office of State Budget and Management included something like this in the governor’s recommended 2015-17 budget, though with a smaller variation in expenditures.

Joseph Coletti is a senior fellow at the John Locke Foundation.

Inflation and harming the ‘least of these’

How the spending spree will end