That’s all they want, according to their adopted slogan, which is part of a campaign and accompanying website, craftfreedom.org.

The primary goal of the campaign — we could reasonably call it a movement — is eliminating a state law requiring brewers to procure a distributor once their beer output reaches 25,000 barrels.

“All we want is what’s fair,” the website proclaims.

That’s not really all that brewers want, of course, and even the word “all” is relative, meaning different things to different people.

But the message to lawmakers is clear, again, from the website: As small brewery owners, all we want is the chance to maintain control over the businesses that we built.

Fair enough, so to speak.

Ryan Self is director of sales for Olde Mecklenburg Brewery in Charlotte, a veritable stalwart among North Carolina brewers. The brewery opened in 2009 and now, according to the N.C. Craft Brewers Guild, has some 180 cohorts across the state.

As Self points out, that success carries a price. 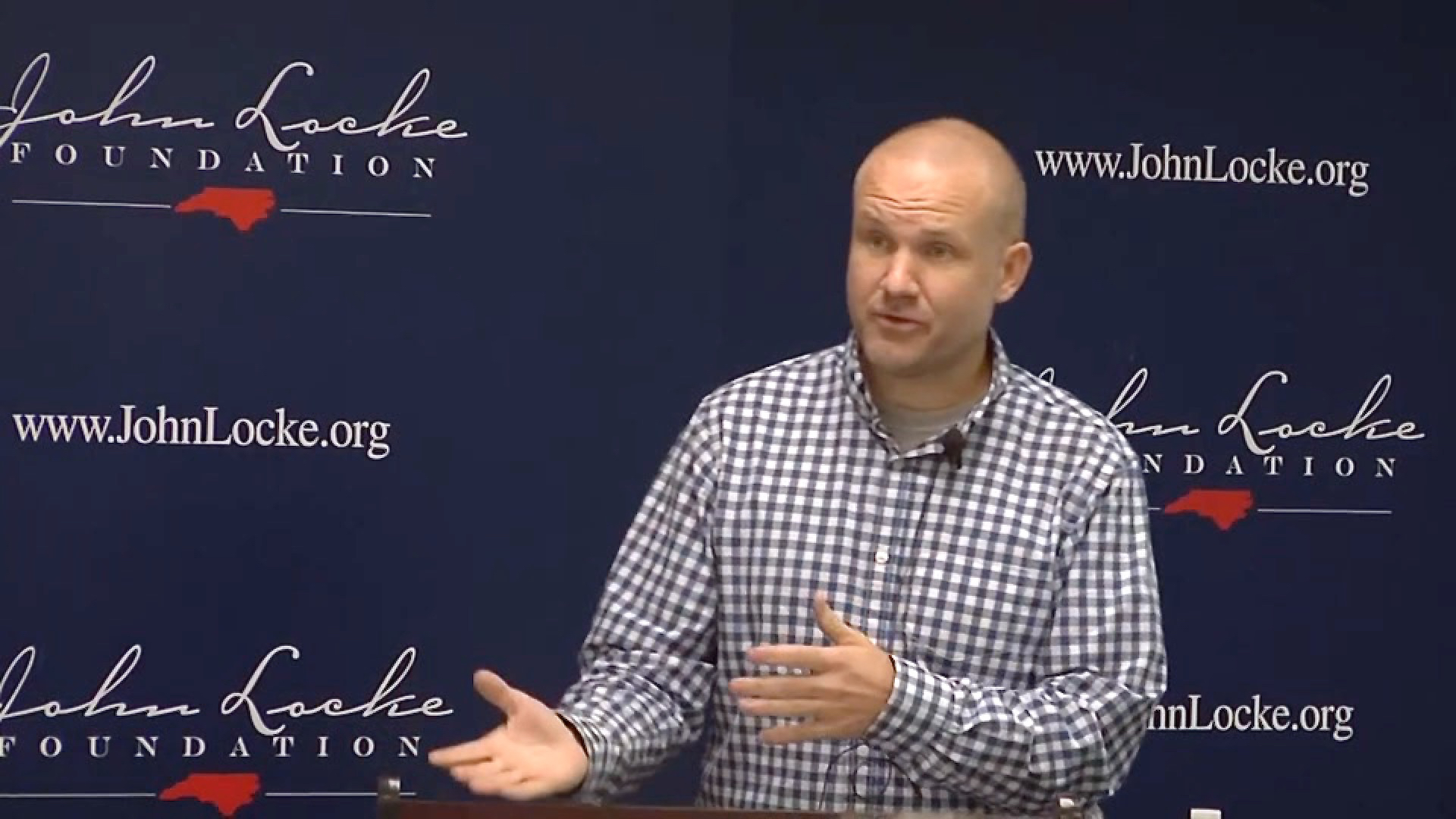 Ryan Self of Olde Mecklenburg Brewery in Charlotte, explains to an audience Monday at the John Locke Foundation about the barriers craft brewers face as they grow in a competitive market. (CJ video image)

Breweries and wineries in North Carolina must navigate regulatory hazards dating back to Prohibition, which didn’t end in North Carolina until the state’s Alcohol Beverage Control system was established in 1937. That system remains strong today, as North Carolina remains one of 17 control states, meaning the state has control over some if not all of retailing and wholesaling alcoholic beverage sales.

The restraints on the relatively nascent distilling industry are much stronger. The state didn’t allow distilleries until 1979, and North Carolina’s didn’t get is first spirits maker until 2005. Distillers can offer only small samples to customers who visit their distilleries, and those customers can buy just one bottle of any of their products per year. Of course, people can buy as much as they wish through the ABC system.

Beer entrepreneurs are pushing for lawmakers to lift a rule that forces breweries to hire a distributor — the so-called “middle man” — once a brewery reaches a production threshold of 25,000 barrels in a calendar year.

The distributor, as Self points out, would take control of sales, delivery and distribution, in effect losing a hefty percentage of its profits as well as local jobs.

The choices before customers are unprecedented and so, as a result, is the market.

“So the idea of a handful of monolithic providers who control the market really has been undone by the consumer,” Self said during a recent presentation for the John Locke Foundation’s Shaftesbury Society.

The monolith has arisen in the distributional channel.

Distributors are certainly important and necessary, but, he says, distributors who represent multiple brands serve many masters. Inevitably, customer choice, depending on the market and circumstances — the number of bars, tap rooms, shelf space — becomes limited.

Craft brewing is evolving and expanding, yet just 4 percent of the beer sold in North Carolina is made in North Carolina, and that, he says, includes breweries such as Sierra Nevada and Oskar Blues, which started someplace else but expanded into the Tar Heel State. As far as the other 96 percent, local distributors keep a percentage of the money, but the remainder leaves North Carolina.

“It takes all those dollars out of our communities and ensures, instead of us having strong local breweries, we have a strong beer scene, but not one that is really home grown.”

State regulations create what Self calls “a flattening effect,” meaning breweries can get only so big.

“We’re going to miss the boom. The boom is happening, and we’re sort of stuck in neutral right now.”

Same goes for distillers, but their situation may be even more urgent. North Carolina will soon have about 50 distilleries producing liquor, which — other than the one bottle — they neither can sell nor mix and serve at their distilleries.

“For small-time entrepreneurs who want to enter the market for the first time, however, the regulatory regime constitutes a huge barrier. It’s very difficult for them to become familiar with the entire body of laws and rules, let alone acquire the expertise and contacts that are needed to deal effectively with all of the relevant agencies,” the report says.

This past summer I talked with Tim Ferris, founder of Blue Ridge Distilling Company in Bostic, which makes the popular Defiant single-malt whisky, for my upcoming book Still & Barrel: Craft Spirits in the Old North State (Blair 2017).

“My dad used to say, ‘They tie you hand and foot then shoot you because you can’t dance.’ It’s archaic.”

Breweries and wineries have made some in-roads, and distillers have taken a figurative first step. The so-called boom is getting louder, a core example of America’s innate spirit of entrepreneurship. Opponents of such expansion can no longer block out the noise from the market, so they would do well to embrace it. To take a minute to stop and to listen.