The COVID-19 response in America has focused on several fronts. The main goals are stopping the spread of the virus, mitigating economic damages, and creating a vaccine or discovering therapeutics. A new survey from the Centers for Disease Control and Prevention highlights another area of concern, one that could challenge communities, the health care industry, and public health officials for some time after the virus subsides: mental health issues.

The CDC survey asked people about mental health issues, substance use, and thoughts of suicide. Table 1 from the survey examined respondents’ answers according to their gender, age, and race/ethnicity. Here is that table and some takeaways from it: 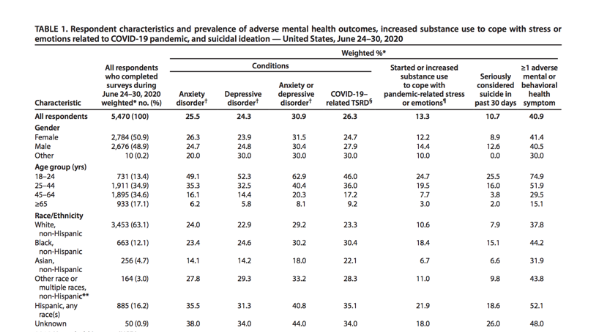 Chart from Centers for Disease Control and Prevention.

In terms of gender, the survey found men and women similar in the prevalence of an anxiety or depressive disorder. But men were more likely than women to report having seriously considered suicide in the past 30 days (12.6% to 8.9%).

In terms of race/ethnicity, the survey found four out of 10 (40.8%) of Hispanic Americans reported prevalence of an anxiety disorder, which was the highest among the racial and ethnic groups. Blacks and whites reported similar prevalence of anxiety disorders, 30.2% and 29.2%, respectively. For Asians, the number was 18%, whereas for “other race or multiple races,” the prevalence reported was much higher, at 33.2%.

For the population in general, the numbers are concerning:

The devastating high prevalence of anxiety, depression, and thoughts of suicide will likely have lasting impacts on the younger generations and their families.

Two other variables worth highlighting are employment status and unpaid adult caregivers. Both variables were self-reported.

Employment status looked at differences among the employed, unemployed, and those who were deemed essential and nonessential. Unemployed students were considered nonessential workers.

Unpaid adult caregivers were defined as an adult who had provided care without pay to a relative or friend older than 18 years old by helping with personal needs, household chores, health care tasks, managing finances, doctors’ appointments, arranging for outside services, and regular visits to see how they were doing.

Here is the CDC table on those characteristics and some takeaways:

Chart from Centers for Disease Control and Prevention

The survey found that those deemed essential workers or who classified themselves as unpaid adult caregivers fared far worse in terms of anxiety and depressive disorders, substance abuse, and suicidal thoughts.

Essential workers reported higher rates of anxiety or depressive disorders than nonessential workers, 42.4% vs. 29.9%. They were also far more likely to have started or increased substance use to cope with pandemic-related stress, 24.7% vs. 10.5%.

Anxiety and depressive disorders affected employed and unemployed respondents at similar rates, 37.8% and 36.4%. But the employed were more likely to have experienced serious suicidal thoughts (15% to 4.9%) and to have started or increased substance use (17.9% to 7.7%).

We know that this can be a deadly virus. As of this writing, more than 172,000 Americans have passed as a result of COVID-19. The mental health damage caused by this disease and government responses to it may not be fully appreciated by the public and government officials.

The CDC survey paints a bleak picture of how Americans are mentally handling the disease. Anxiety and depressive orders, substance abuse, and thoughts of suicide are up, especially among younger and essential workers. Unpaid adult caregivers are especially bearing the brunt of mental damages.

As the country continues to battle the virus and looks forward to a post-COVID world, public health officials and elected officials need to weigh the mental damages that result from a shutdown society with the virus response.

The Biden administration’s hand is in the cookie jar

We have much fear already, so stop trying to create angst, uncertainty