The beauty of American diversity

“Give me your tired, your poor,
Your huddled masses yearning to breathe free,
The wretched refuse of your teeming shore.
Send these, the homeless, tempest-tost to me,
I lift my lamp beside the golden door!”

– The New Colossus, engraved at the base of the Statue of Liberty

Immigrant. What do you think of when you hear that word? For me, the descriptor conjures words like “hard working,” “courageous,” and “entrepreneurial.” And rightly so. A study conducted by Caleb Watney of PPI found that, “More than half of America’s billion-dollar startups were founded by immigrants, and 80% have immigrants in a core product design or management role.” He also notes that, although immigrants make up only 18% of our workforce, they have won 39% of our Nobel Prizes in science.

These stats are laudable, to say the least, but the idea of immigration struck a more emotional chord with me over the weekend, as I was scrolling my Twitter feed and came across this video that captured my attention immediately.

The video highlights an elementary school cafeteria manager in Oklahoma who had just passed her U.S. citizenship test. The hallways were lined with students and teachers, all masked but back in-person, cheering her on. They were excitedly chanting “USA! USA!” as we witness one of our nation’s newest citizens walk down the hall, wiping her eyes, clearly moved by the fact that the entire student body was honoring her accomplishment. You see her hold up her small American flag and wave it and then hold it closely to her heart. The entire exchange is moving.

It made me pause for a moment and reflect on the beauty of our diversity. Eight percent of North Carolina’s population are immigrants. One-third of all who work in farming, forestry, and fishing have immigrated from another country and around 20% of those in a math and science profession are foreign-born, according to the American Immigration Council.

Sadly, the notion of diversity has become politically charged and polarizing in recent years, but when one steps outside of the current climate of bad faith arguments and toxic tribalism, we see that E pluribus unum–out of many, one–is a foundational, core principle of our nation. Diversity is our rule, not our exception.

It’s important to pause here and note that our immigration system is far from perfect. If you have loved ones who have tried to navigate it, you know better than most. Sadly, I don’t see the Biden administration as especially adept at sound or compassionate immigration policy. James Antle, writing for NBC News Opinion, notes, “Playing to the wishes of the Democratic base while ignoring the need for more enforcement has merely exacerbated the problem at the border and is becoming impossible to deny, much as the Biden administration would like to.” Creating even more dissonance, Biden’s administration is tracking to admit the fewest refugees than any modern U.S. president.

Yet, setting aside the policy nuances and debates, focusing instead on the gains our nation has made because of immigrants, is a worthwhile endeavor.

Brilliant minds like Albert Einstein, Ayn Rand, Nikola Tesla, and Igor Stravinsky, to name a historic few, all immigrated to America, leaving behind laudable legacies in their respective fields. In a positive turn of public opinion, Americans are increasingly optimistic about the contributions of immigrants, viewing them as boons to our national fabric, rather than unfairly characterizing these new countrymen and women as burdens. The Pew Research findings below show how significantly public perception has changed over the decades. 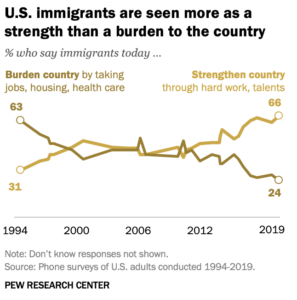 America’s founding ideals are not rooted in homogeneity of race or ethnicity. In fact, G.K. Chesterton, a British writer, observed on his first visit across The Pond that we were vastly different from our European counterparts in that we were not a country that existed because of ethnic ties. In his 1922 book, What I Saw in America, he writes that, “America is the only nation in the world that is founded on a creed.” And that creed is best summed up in our Declaration of Independence’s seminal statement that, “We hold these truths to be self-evident, that all men are created equal, that they are endowed by their Creator with certain unalienable Rights, that among these are Life, Liberty and the pursuit of Happiness.”

When I think about the contributions made by immigrants in my own circle, like my father in law, who came to New York City from Ecuador at 16 years old, my brother in law, who immigrated from England, or my friends Phoebe who moved here from Ghana and Deepshika from India, I am filled with a sense of gratitude as I marvel at America’s glorious diversity.

The United States of America is the greatest nation on earth and the contributions of the millions of immigrants who have overcome hardships and painful challenges to be here are one of the many reasons why.

To do good or do better