That was a key argument in closing arguments wrapping up a four-day trial on the maps. Under an order from the state Supreme Court, the three-judge panel must issue a ruling in the case by Tuesday.

Challengers repeatedly referenced a lower court ruling from 2019 that declared, for the first time, election boundaries drawn with political biases can violate the state Constitution. 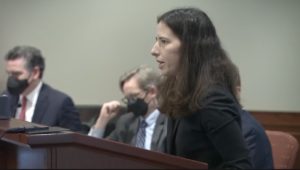 The challengers asked the Superior Court panel to block the use of the new maps and order them redrawn.

“The plans were drawn to entrench Republican dominance,” said Elisabeth Theodore, attorney for one group of plaintiffs, “regardless of how people actually vote.”

Legislative defendants also argued that it is impossible for the court to develop a manageable standard determining how much politics is allowed in map drawing and when an inherently political process becomes too political. 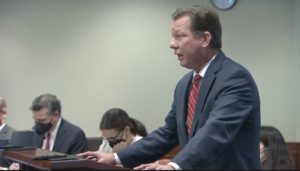 Phil Strach, arguing on behalf of legislative leaders, told the court that the plaintiffs want the judicial branch to seize power for Democrats to overcome the minority party’s lack of appeal to voters across a wide geographic area of North Carolina. Strach said the courts should not rescue Democrats from failure at the ballot box.

“Your honors, if there’s any threat to democracy here, it’s plaintiffs’ theories,” he said.

Legislative defendants asked the court to ignore the plaintiff’s “expert” witnesses, who concluded based on computer simulations that the enacted maps are extreme partisan outliers.

“Politics is not a math problem,” Strach told the court.

Strach said the Democrats’ map simulations are extremely flawed, with algorithms designed to boost their party and hurt the GOP.

That’s a “shiny irrelevant object,” Strach said. “I think about the Wizard of Oz. When you approached the wizard, he was grand, and then what you learned was that the Wizard of Oz was nothing more than a man behind the curtain.”

Carolina Journal reported on the plaintiffs’ arguments in the case here and here.

John Locke Foundation Senior Political Analyst Mitch Kokai wrote that the plaintiff’s lead witness produced research that undercuts Democrats’ arguments. Using results from the 2020 presidential election as a predictor, computer-generated “fair” redistricting maps would produce a 9-5 Republican majority within North Carolina’s congressional delegation 73% of the time. In another 9% of simulations, Republicans would gain a 10-4 edge.

Critics have argued that the enacted congressional map also would produce a 10-4 GOP majority. In comparison, the Democrat experts’ computer simulations would produce an even 7-7 map just 1.3% of the time.

Given that information, it doesn’t make sense to label the enacted congressional map as an extreme partisan outlier.

As reported by Carolina Journal, two leaders of North Carolina’s legislative redistricting committees defended their election map-drawing process during the third day of a trial Wednesday.

Hall, chairman of the House Redistricting Committee, testified that he drew the map ultimately adopted for N.C. House elections. After his direct testimony, Hall faced the day’s most heated cross-examination. Allison Riggs of the Southern Coalition for Social Justice, one of the plaintiffs’ lawyers, grilled Hall about “concept maps” a legislative staffer drew outside the formal redistricting process.

Hall labeled those concept maps as inconsequential. He said they had no impact on the map he eventually drew. Because no record of the concept maps now exists, Riggs and her colleagues have accused Hall and his staffer of destroying evidence necessary for the trial.

In closing arguments, challengers asserted the concept maps could have incorporated racial and political data that legislative leaders pledged not to use when drawing maps and should be taken as proof of intent to engage in extreme partisan gerrymandering.

The General Assembly’s enacted maps are scheduled to be used in 2022 elections for all 120 N.C. House seats, all 50 state Senate seats, and North Carolina’s 14 seats in the U.S. House of Representatives.

The N.C. Supreme Court accepted the map critics’ request to shut down candidate filing for 2022 elections. The state’s highest court also delayed all N.C. primary elections from March 8 to May 17.

The Supreme Court also ordered the three-judge panel to hold a trial on the maps and issue a ruling by Jan. 11. Any appeal of that ruling must be made directly to the Supreme Court within days of that deadline.