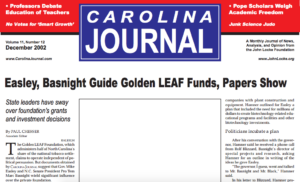 • When Golden LEAF announced its $85.4 million biotechnology “stimulus” initiative in August, its leaders claimed that they operated independent of political influence. However, documents related to the stimulus deal reveal that intense pressure was placed on the foundation by North Carolina’s two most powerful politicians. Page 1

• After the North Carolina House majority swerved to Republicans Nov. 8, political observers at a John Locke Foundation luncheon in Raleigh heard election analysis from state and national pundits. Page 3
• The United States hung a big “kick me” sign on its backside in the Middle East, and the Arab world has obliged, former CIA Director R. James Woolsey said at a Locke Foundation dinner. Page 3

• Professors and deans of schools of education heatedly disagreed over the direction of education schools in a panel discussion at the Pope Center for Higher Education Policy’s conference. Page 6
• North Carolina’s Compliance Commission has made several recommendations to the State Board of Education on accountability issues contained in the No Child Left Behind Act. Page 7
• Amid fanfare, a new curriculum item has arrived on the scene in North Carolina’s public schools. It’s called character education, and along with the Student Citizen Act of 2001, promotes target behaviors that successful character education students should exhibit. Page 8

• A panel of academic thinkers discussed academic freedom in the wake of September 11 as part of the Pope Center for Higher Education Policy’s conference in Chapel Hill. Page 10
• Academics also addressed several challenges facing higher education at the Pope conference, including answering calls for increasing accountability, restoring liberty and dignity, and translating lofty goals into practical application. Page 11
• House Undergraduate Library at the University of North Carolina at Chapel Hill will receive an endowment worth at least $20,000 from the senior class of 2003. Page 12
• The saga of Michael Bellesiles appeared to come to an end in late October when the antigun scholar resigned from the faculty of Emory University. Page 12

• The September release of a Smart Growth America study charging that North Carolina’s Triad and Triangle regions are home to the second and third most serious sprawl problems in the country put discussion of so-called “smart growth” back in the state’s news. Page 14
• The airline industry continues to be caught in a severe financial downdraft, yet despite setbacks, North Carolina’s main airports remain attractive — and busy — places to fly from. Page 15
• Wilmington-area officials are re-examining their transportation priorities after discovering that a planning document formally adopted in 2001 contains cost estimates that are grossly inaccurate. Page 17

• A book review by Carolina Journal’s George Leef of The Strange Death of American Liberalism by H. W. Brands, and a review of the HBO documentary “Journeys with George.” Page 18
• Review of the books Junk Science Judo: Self-Defense Against Health Scares & Scams by Steven J. Milloy, and The Death of the West: How Dying Populations and Immigrant Invasions Imperil Our Country and Civilization by Patrick J. Buchanan. Page 19

• The Locke staff rings in sales-tax increases with a stocking full of carols! Page 24