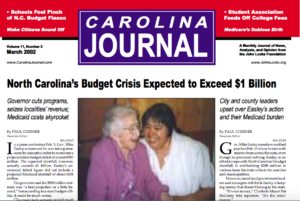 • Is Gov. Mike Easley trying to wish away the budget situation? First he neglected to include overages in Medicaid payouts in his $900 million figure, hoping for federal help, then renewed a campaign to get a lottery in the state. Page 1

• Localities around the state are cutting school budgets, even though Gov. Mike Easley promised that his taking of local revenues would not hurt education. Page 6
• The Department of Public Instruction was supposed to release an ABCs report in October, but ever-changing accountability standards delayed it until February. Page 7
• Charlotte-Mecklenburg Schools recruited consultants to study ways the system can be more efficient, and the firm found $4 million to $8 million that can be saved annually. Page 8
• Over the last 12 years, 73.9 percent of Manteo High School’s advanced placement calculus students have attained the highest score on an AP standards test. Page 9

• Despite the remarkable student apathy concerning tuition increases in the UNC system, the UNC Association of Student Governments has agitated against them. Page 10
• While a black student group said insufficient aid caused low black graduation rates at NC State, the Center for Equal Opportunity said racial preferences placed greater academic burdens on those students than they could bear. Page 11
• Editorial intern Brian Gwyn writes that the steep rise in tuition in the UNC system can be traced to what happens when primary beneficiaries of a service don’t bear the primary cost. Page 11
• A poll released by the Independent Women’s Forum found that 96 percent of college students said the Sept. 11 terrorist attacks influenced their lives. Page 12
• New courses inspired by the events of Sept. 11 have come under some criticism for being “gadfly courses” and “politically correct pseudo-courses.” Page 12
•Officials at UNC-Chapel Hill announced the university will not establish a campus of the Kenan-Flagler Business School in the nation of Qatar. Page 13

• NC Citizens for a Sound Economy sponsored an event in Raleigh that featured an update on satellite polling places and a report from Wake County commissioners on schools, the budget, and taxes. Page 14
• Sam Staley, a director at the Reason Public Policy Institute, discussed “smart growth” issues in Charlotte last month. Page 15
• An interview with Harnett County Commissioner Teddy Byrd. Page 16

• Editorials on the Golden LEAF Foundation’s control of half of North Carolina’s tobacco settlement, and Gov. Mike Easley’s handling of the state’s budget problems. Page 20
• Editorials on renewed patriotism post- Sept. 11, and North Carolina’s pursuit of unproven environmental policies. Page 21
• Michael Walden says the Department of Defense contributes much more to the economic development of the nation than do the Commerce and Labor departments. Page 22