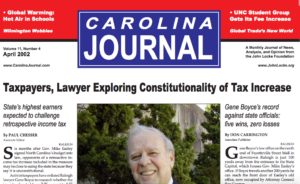 • It could be deja vu all over again. Raleigh lawyer Gene Boyce, who has successfully sued the state over unconstitutional tax issues in the past, may be gearing up for another battle because of the General Assembly’s retroactive income tax increase last year. Page 1

• It wasn’t really a check, and some say Rep. Monroe Buchanan isn’t really a Republican, but that didn’t stop him from taking credit for bringing money to his district. Page 4
• Associate Publisher Don Carrington reports about hearings on the disposal of the Global TransPark Education and Training Center. Page 4
• Diaper parties attended by a small-town police chief led to the exposure of a state investigation into corruption by the western region DMV. Page 5

• Assistant Editor Sherri Joyner previews Earth Day, and she says North Carolina schools are teaching students that the Earth is getting hotter. Page 6
• President Bush’s Education Secretary Rod Paige spoke at Duke University Feb. 20 about the recently passed No Child Left Behind legislation. Page 7
• Lindalyn Kakedelis writes about the arrogance of school boards that ignore the concerns of parents in favor of the system. Page 7
• A report by the Southeast Center for Teaching quality found that North Carolina fails to target teachers for hard-to-staff schools. Page 8

• The UNC Board of Governors, through increased student fees, raised the budget for the UNC Association of Student Governments by 6,600 percent. Page 10
• North Carolina’s colleges are keeping up with the national trend toward sexualization of courses and campus events. Page 10
• From conservative Supreme Court Justice Clarence Thomas to liberal actress Alfre Woodard, North Carolina campuses sponsored a wide variety of speakers this winter. Page 11
• A student’s outrage over a discussion about Lincoln at N.C. State led to a demonstration, racial tensions, and upset students. Page 12
• Darren O’Connor’s writings on the problems with affirmative action led N.C. State’s black student newspaper to doctor his photo for its back page. Page 12

• Between annexation and the scandalous handling of money, Assistant Editor Erik Root says the City of Wilmington is in serious trouble. Page 14
• Cities and counties from around the state are trying to cope with the ramifications of losing state tax reimbursements because of the budget shortfall. Page 15
• An interview with Raleigh Police Chief Jane Perlov. Page 16

• George Leef reviews The Race to the Top by Tomas Larsson, and Erik Root discusses Chief Justice John Marshall’s classic The Life of George Washington. Page 18
• Reviews of Voodoo Science: The Road from Foolishness by Robert Park, and Internal Improvement: National Public Works and the Promise of Popular Government in the Early United States by John Lauritz Larson. Page 19

• The recently completed Winter Olympics in Salt Lake City and a proposal to create an artificial whitewater river park in Charlotte inspire other North Carolina cities to come up with similar ideas. Page 24