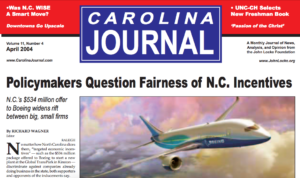 • No matter how North Carolina slices them, “targeted economic incentives” — such as the $534 million package offered to Boeing to start a new plant at the Global TransPark in Kinston — discriminate against companies already doing business in the state, both supporters and opponents of the inducements say.

• Latino households with school-age children find more to like in the nation’s public schools than do white parents or black parents, a national survey by the Pew Hispanic Center found. Page 6
• N.C. public schools plan to spend up to $150 million on a computer system that some teachers say is plagued by glitches and is too costly. Page 7
• Lindalyn Kakadelis writes that, after her visit to the Dominican Republic, she is more committed than ever to civil rights and social justice for lower-income students. Page 7
• Lack of education and vocational training has left the North Carolina public school system lagging in the competitive race of building a competent workforce to attract new corporations and businesses to the state. Page 8

• The selection committee for UNC-Chapel Hill’s summer reading program sought to avoid protests of recent years by opening the selection process, and this year’s choice is a book that looks at service and the sacrifce and a group of cadets at West Point. Page 10
• George Leef says it’s a UNC ritual: Whenever a professor decides to take a better offer at some other university, the administration expresses fear over a “crisis” if the school can’t spend enough money to compete with the top-tier schools. Page 11

• An independent approach is out of sync with many community leaders in Sanford, who have been skeptical of entrusting downtown revitalization to the autonomous efforts and decisions of business owners and managers. Page 14
• Catawba County is making use of an innovative health-care arrangement in an effort to limit the amount of money it spends on employee health care. Page 15

• Jon Sanders reviews the film, The Passion of the Christ. Page 18
• Reviews of the books Trembling in the Ivory Tower by Kenneth Lasson, and Free Trade Under Fire by Douglas A. Irwin. Page 19

• Paul Chesser says a look at Gov. Mike Easley’s record since 2001 shows that the greatest influence upon his economic development policy is his ability to get a good press release out of the deal. Page 20
• An editorial on how transportation issues could effect North Carolina elections this year. Page 21
• Marc Rotterman writes that Democratic presidential contender Sen. John Kerry is on multiple sides of almost every issue and challenge that confronts America. Page 22
• Michael Walden writes that, believe it or not, the statistics that two million jobs have been lost nationwide in the last three years, but almost 800,000 net new jobs have been created, are both true. Page 23