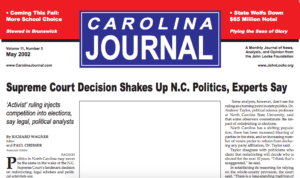 • Analysts say the N.C. Supreme Court, in handing down a 4-1-2 decision that invalidated a redistricting plan approved by the General Assembly, might has shaken up politics as usual in the state, which has been controlled by Democrats since the days of Reconstruction. Page 1

• Rep. Fern Shubert, a Republican from Union County, will introduce a bill in May to shore up North Carolina’s driver’s licensing standards. Page 4
• The John Locke Foundation celebrated its 12th anniversary at a dinner March 22, and The Weekly Standard’s William Kristol shared his thoughts on the war. Page 4
• The state’s computer consultant for electronic procurement and its website have been associated with problems with other state governments. Page 5

• Sherri Joyner considers how the recently passed No Child Left Behind Act will influence school choice options in North Carolina. Page 6
• After five years of ABCs testing and accountability, North Carolina schools have had little success, if any, closing the achievement gap between white students and black students. Page 7
• Lindalyn Kakedelis writes that if the U.S. Supreme Court upholds Cleveland’s school voucher program, we can expect a flood of legislation supporting educational options. Page 7
• The Children’s Scholarship Fund helped Ronetta Stewart get her children into Charlotte’s Providence Day School, much to her joy. Page 9

• North Carolina State University plans to issue bonds to build a $65 million conference center and golf course on its Centennial Campus. Page 10
• The University of California system now admits proportionately more minority students than it did before the UC Regents’ ban on race-preferential admissions in 1998. Page 11
• A study by the Independent Women’s Forum of syllabi at 30 major colleges and universities found that women’s studies textbooks are riddled with lies and prejudice. Page 11
• A survey of faculty members in nine departments at UNC-CH by the conservative student magazine Carolina Review found that more than four-fifths are registered Democrats. Page 12
• Continuing a series on issues in higher education, Jon Sanders looks at race, and says racial hypersensitivity poisons the atmosphere at universities. Page 13

• George C. Leef reviews the book On Seas of Glory: Heroic Men, Great Ships, and Epic Battles of the American Navy by former Secretary of the Navy John Lehman. Page 18
• Reviews of Only One Place of Redress by David E. Bernstein and Unfree Speech: The Folly of Campaign Finance Reform by Bradley A. Smith. Page 19

• Editorials on corruption in the North Carolina Division of Motor Vehicles and retroactive tax increases. Page 20
• Editorials on NCSU’s plans to run a hotel and the John Locke Foundation’s Tax Awareness Tour. Page 21
• Michael Walden answers the question: How could anyone be in favor of trade with foreign countries if that trade results in job losses here at home? Page 23

• Because “kids are going to do it anyway,” Wake County schools plan to teach children about “safe speeding,” ignoring stop signs and responsible smoking, among other programs. Page 24