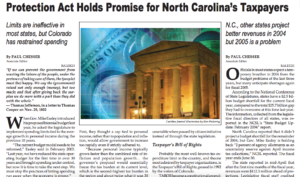 • When Gov. Mike Easley introduced his proposed biennial budget last year, he asked for spending limits, and was ignored. After four years of budget deficits and raising taxes, is it finally time for a Taxpayer Bill of Rights in North Carolina? Page 1

• The air turned foul in a General Assembly committee meeting when representatives of various industries in the state assailed the state Department of the Environment and Natural Resources. Page 4
• Citizens Against Government Waste reported that North Carolina, after finishing 51st last year in per-capita pork spending, ranked second-to-last this year. Page 4
• Gov. Mike Easley announced that North Carolina had awarded a $7 million grant to Verizon Wireless to build a call center in Wilmington, but an investigation by CJ revealed that state officials might have violated state laws and guidelines in making the award. Page 5

• Some middle- and high-school science teachers were surprised to learn that neither physics nor chemistry are required courses for college-bound students in North Carolina. Page 6
• Recent events have put the Milwaukee school voucher program back in the news, and may have tarnished the program’s image among supporters and foes alike. Page 6
• As public schools look for new sources of money, one source of savings hasn’t been much discussed: The requirement that illegal alien children get a taxpayer-financed education. Page 7
• The quality of American teachers is not getting dramatically worse, as some analysts have assumed, but it’s not getting better, either, new research shows. Page 8

• Carolina Students for Life was rebuffed for the second straight year for inclusion in Women’s Week at the University of North Carolina at Chapel Hill by the Carolina Women’s Center. Page 10
• Supporters of a Michigan civil rights initiative must collect nearly 318,000 valid signatures before July 6 in order to be added to the November 2004 ballot. Page 12

• A Brunswick County official has been caught between frustrated developers and state engineers when permitting delays have occurred on some wastewater systems being built in areas of the county not already serviced by existing public systems. Page 15
• The president of the N.C. Center for Applied Textile Technology created the appearance of a conflict of interest by accepting outside teaching jobs, the State Auditor’s Office said in an investigative audit released in mid-April. Page 15
• An interview with Fox News military analyst Gen. Thomas McInerney. Page 17

• Donna Martinez reviews the Weather-spoon Art Museum’s Borne of Necessity exhibition at the University of North Carolina at Greensboro. Page 18
• Reviews of the books The Rule of Lawyers—How the New Litigation Elite Threatens America’s Rule of Law by Walter Olson, and Wealth and Our Commonwealth: Why America Should Tax Accumulated Fortunes by William H. Gates Sr. and Chuck Collins. Page 19

• Richard Wagner says the mantra that “if you have a player who’s afraid of losing, take him out,” applies today to the nation’s morale and the War on Terrorism. Page 20
• Editorials on North Carolina’s jobs record and on reform of the federal Section 8 housing voucher program. Page 21
• Dr. Roy Cordato writes that a study recently touted by the Easley administration ignores entire categories of business taxation and the most basic principles of tax analysis. Page 23
• George Leef writes that colleges and universities in North Carolina should reject social engineering and start getting back to teaching students the things that matter. Page 23

• CJ parody: With all the economic incentives being handed out in North Carolina lately, lawyers are LIABLE to get in on the action. Page 24