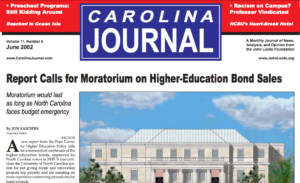 • A new report from the Pope Center for Higher Education Policy calls for a moratorium on the sale of higher-education bonds approved by North Carolina voters in 2000. It also criticizes the University of North Carolina system for not giving repair and renovation projects top priority and for insisting on more expensive contracting procedures for bond projects. Page 1

• U.S. Sen. John Edwards led the fight against President Bush’s judicial nominee Charles Pickering, which drew the ire of North Carolina Congressman Walter Jones Jr. Page 4
• The John Locke Foundation says the state has the capability to balance next year‘s budget, and offers advice on how to do so in its alternative budget. Page 4
• A study of the transfer of Global TransPark assets and operations to another entity by the state DOT was late, short, and likely meaningless. Page 5

• Assistant editor Sherri Joyner interviews school choice advocate Clint Bolick during his recent visit to North Carolina. Page 7
• Lindalyn Kakedelis writes that the time has come to demand from the state end-of-grade accountability through genuine quality testing. Page 7
• Just a little more than half of students who enter high school in North Carolina graduate four years later, and the number has fallen steadily over the last decade. Page 8
• Steering committee members of the Children’s Scholarship Fund decide to raise funds on their own in order to help some students ineligible for CSF funds to stay in school. Page 9

• North Carolina State University administrators and professors come to the support of embattled Professor Philip Munoz, who was accused of fostering a racially hostile climate in his class. Page 10
• State Sen. Steve Metcalf received a $95,000-a-year position at Western Carolina University, and now some say he has a conflict of interest. Page 11
• George Leef mourns the dumbing-down of America, saying the evidence points to a nationwide deterioration of general education in our universities. Page 11
• Assistant editor Jon Sanders reports on a recent teach-in on terrorism at UNC-Chapel Hill, and a (sort of) related campus dialogue on race at North Carolina State University. Page 12
• Sanders discusses the history and progression of getting a liberal arts education. Page 13

• Reviews of the books The Academic Achievement Challenge by Jeanne Chall and Our Post Human Future: Consequences of the Biotechnology Revolution by Francis Fukuyama. Page 18
• Reviews of the books Unfree Speech: The Folly of Campaign Finance Reform by Bradley A. Smith and The American Soul: Rediscovering the Wisdom of the Founders by Jacob Needleman. Page 19

• Editorials on the state Supreme Court’s redistricting decision and wasting money at the N.C. Technological Development Authority. Page 20
• Editorials on political self-justification and elected state officials who are also employees of the state. Page 21

• The date is June 2007, and after years of having to take other money to balance the state budget, Gov. Mike Easley finally decides to use a bit of economic development money to accomplish the task. In response, economic developers and corporate beneficiaries stage a protest. Page 24