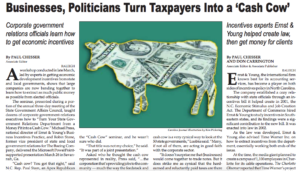 • A workshop conducted in late March, led by experts in getting economic development incentives from state and local governments, shows that large companies are now banding together to learn how to extract as much public money as possible from elected officials. Page 1

• The National Center For Education Statistics predicts that by 2013 North Carolina will have 11,000 to 12,000 fewer K-12 students in its schools than in 2001. Page 6
• In recent articles, editorials, and columns about “white flight” in Durham Public Schools, The News and Observer of Raleigh made sweeping assertions and accusations without offering proof and advocating “solutions” that some educators say that might actually compound the problem. Page 7
• When North Carolina legislators dropped the high school graduation exit exam for 11th-graders, they weren’t necessarily saying that there should be no final requirement for graduation. But with the four-year graduation rate at just 60 percent, they also weren’t willing to see it go lower on the basis of one high-stakes test. Page 8

• Student-athletes of colleges and universities have been placed under the microscope recently by the NCAA in its attempt to increase graduation rates. Page 10
• With the war on terrorism ongoing in Iraq and Afghanistan, graduates at some area colleges heard firsthand from two individuals who have been involved in policy decisions regarding Iraq and the Middle East. Page 11
• About 30 people attended a forum May 8 to discuss bias against conservatives on college campuses, where speakers cited personal examples of bias from North Carolina, Virginia, and New York. Page 11
• Despite worries of it being “cut to the bone,” the budget for the University of North Carolina is expected to be a little larger by the time the General Assembly concludes its session this year. Page 12

• The uneven capability to detect a cell caller’s location in North Carolina exists despite the fact that the state’s wireless users have paid more than $125 million in monthly cell-phone surcharges since 1997. Page 14
• When the Federal Transit Administration released its proposed fiscal 2005 budget in February, there were plenty of disappointed transit supporters in both the Triangle and Charlotte. Page 15

• A review of the book, An Unlikely Conservative: The Transformation of an Ex-Liberal (Or How I Became the Most Hated Hispanic in America), by Linda Chavez. Page 18
• Reviews of the books The War Against Excellence by Cheri Pierson Yecke, and Genius Denied by Jan and Bob Davidson. Page 19

• Marc Rotterman agrees with Gov. Haley Barbour of Mississippi, who describes John Kerry as a taller, thinner version of Ted Kennedy. Page 22
• Michael Walden writes that the phrase “service economy” worries many people because they think that it implies low-paying jobs and a lower standard of living, but he says it should not be feared. Page 23

• CJ parody: The producer of the Girls Gone Wild video series is looking for a permanent site to produce the controversial tapes, and three Southern governors have gone wild over the prospects for landing the project. Page 24