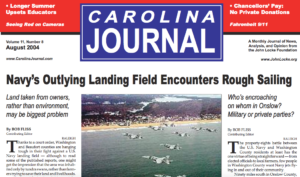 • The battle over property rights, rather than the environment, might prove to be the biggest challenge facing the Navy’s Outlying Landing Field. Meanwhile, in Onslow County, residents around Camp Lejeune contend with constant military exercises. Page 1

• An administrator for a taxpayer-supported association characterized Rep. John Rhodes, who has asked State Auditor Ralph Campbell to investigate a state-funded economic development agency, as a “true nutcase” whose only allies “are the very religious right folks.” Page 4
• An automobile auction business, owned by a convicted felon, will expand its Virginia-based wholesale operation into North Carolina, Gov. Mike Easley said at a Curri-tuck County groundbreaking ceremony June 25. Page 5

• Summer break just got longer for students and teachers, thanks to a new law passed by the General Assembly. Many school boards across the state aren’t happy about it, though. Page 6
• The name reflects its home county, but there could be no better description for the outstanding charter school, Union Academy. Page 7
• Zero tolerance disciplinary policies have sometimes become a legal minefield for school officials in North Carolina. Page 8

• Some supporters of the University of North Carolina think the college should rely more on private contributions, less on state resources, to pay chancellors, like many other colleges do. Page 10
• The House and Senate agree for North Carolina to take on more debt to pay for projects at several universities, including a $60 million cardiovascular center at ECU and a $180 million cancer research center at UNC-CH. Page 11
• The executive committee of the Faculty Senate of North Carolina State University has joined the chorus in calling for an open chancellor search. Page 12
• George Leef debunks the theory that colleges need socialist proselytizing to counteract ‘corporate bias.’ Page 13

• A lawsuit against High Point’s red-light camera program may provide some overdue clarification about what actually constitutes a “fine.” Page 14
• The fallout continues from the U.S. Department of Housing and Urban Develop-ment’s audit into the activities of the Durham Housing Authority. Page 16

• A review of the film “Fahrenheit 9/11” by John Plecnik says the film represents the worst of politics and the best of propaganda. Page 18
• Reviews of the books World on Fire: How Exporting Free Market Democracy Breeds Ethnic Hatred and Global Instability by Amy Chua, and Hayek’s Challenge: An Intellectual Biography of F.A. Hayek by Bruce Caldwell. Page 19

• An editorial on the deals and dealings done by North Carolina officials that take more power away from taxpayers and give more authority to the political class. Page 20
• Editorials on Gov. Mike Easley’s handling of the North Carolina economy, and on judicial election reform. Page 21
• George Leef explores North Carolina’s low rating for its small claims court system. Mike Walden explains that relying on Canada for prescription drugs might not be as attractive as Americans think that it would be. Page 22
• Marc Rotterman bids farewell to President Ronald Reagan. Page 23

• CJ parody: John Edwards, after his ticket’s loss to President Bush in November, returns to his first litigious love. Page 24