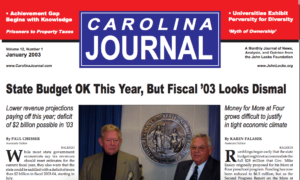 • The North Carolina state budget, barring unforeseen circumstances, seems to be on target for this year. But the new legislature beginning in January will have a doozy of a deficit to fill for fiscal 2003-04. Page 1

• The North Carolina Economic Development Board released its strategic plan in October, which relies heavily on government-funded programs and government coordination efforts. Page 4
• The Center for Local Innovation, a project of the John Locke Foundation, released its annual By the Numbers report, revealing tax burdens for citizens of every county and municipality in North Carolina. Page 5

• Karen Palasek reports on the work of E.D. Hirsch of the Core Knowledge Foundation, whose research on achievement differences led him to conclude, no “duh,” that knowledge makes you smarter. Page 6
• A new series of texts called Critical Thinking About Environmental Issues offers balanced discussions of controversial environmental issues, supplementing and balancing sometimes frightening science textbooks and popular science writing. Page 7
• Lindalyn Kakadelis wonders, as the whining continues and the political pressure mounts over the No Child Left Behind Act, will national leaders cave in or will they demonstrate integrity and courage and stay on course? Page 7
• Palasek weighs differences between norm-referenced, standards-based, and criterion-based tests, explaining which best measure student progress. Page 8

• The diversity movement continues apace in North Carolina higher education, with universities continuing to expend resources in pursuit of diversity, a term generally used to refer to having an appropriate mix of students and faculty of different races, genders, and sexual preferences. Page 10
• Conservative student publications at Duke and UNC are reflecting a growing trend at colleges nationwide, taking universities’ pronouncements in favor of diversity, and questioning why the collegiate notion of “diversity” apparently doesn’t include conservatives. Page 11
• On Dec. 4 a legislative commission allowed North Carolina State University’s proposal to build a hotel and conference center on its Centennial Campus to proceed, after the UNC Board of Governors approved the project in November. Page 12
• By next June the U.S. Supreme Court could finally issue a much-needed clarification of the constitutionality of using racial considerations in college admissions decisions. Page 12

• Boxed in by budget deficits, sluggish tax receipts, Medicaid mandates, and politicians’ unwillingness to hold the line on services, counties are raising property taxes in greater frequency. Page 14
• An interview with Carteret County Commissioner David Fowler. Page 16
• The Cumberland County Board of Commissioners rejected a proposal by a church to rezone 38 acres of land to allow it to build a new sanctuary and other facilities, because the property is too valuable to the county as a possible part of a future large manufacturing site. Page 17

• George Leef reviews the book The Myth of Ownership: Taxes and Justice, by Liam Murphy and Thomas Nagel. Page 18
• Reviews of The American Republic: Primary Sources, edited by Bruce Frohnen; and The Invisible Heart: An Economic Romance by Russell Roberts. Page 19

• An editorial on “junk journalism,” and Associate Editor Michael Lowrey looks at the Global TransPark’s new business plan. Page 20
• Michael Walden says a commonly accepted premise is that America is manufacturing less and less each year, and that the American economy is becoming more dependent on foreign countries for manufactured products, but this widely accepted view is just plain wrong. Page 22