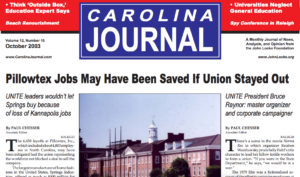 • The 6,450 layoffs at Pillowtex, Inc., which included about 4,800 in North Carolina, may have been mitigated had the union representing its employees not blocked a deal to sell the company. Page 1

• The secondary deal behind the purchase of North Carolina Natural Gas by Piedmont Natural Gas Co. could eventually cause customers’ rates to rise and diminish already faint hope that taxpayer-funded bond money will be repaid. Page 4
• The North Carolina Center for Applied Textile Technology, a state-owned higher-education institution that since 1996 has received more than $1.2 million annually in aid from the state, was audited recently for the first time. Page 5

• The idea of a general education within the University of North Carolina system has “atrophied into a grab bag of elective courses,” says a new study by the Pope Center for Higher Education Policy. Page 10
• A resounding affirmation of free-speech rights on college campuses was recently made by the Office for Civil Rights of the U.S. Department of Education. Page 11
• Jon Sanders writes that a new study of general-education requirements should concern educators, parents, students, legislators, and anyone else who cares about higher education in North Carolina. Page 11
• Several North Carolina Central University buildings have been infested by mold, and surprisingly mold was found in two of the school’s newest dormitories. Page 12

• The next time you walk on a North Carolina beach, take a close look at the sand that’s sliding between your toes — it could be the artificial result of a controversial beach renourishment project. Page 14
• Durham County Commissioners voted to increase tax revenues the county takes in by about $5 million a year. Page 15
• While Cumberland County’s Crown Coliseum is a state-of-the-art facility, one thing has been lacking: Enough events drawing enough people for the building to break even. Page 16
• An interview with Raleigh lawyer Gene Boyce. Page 17

• A review of the Raleigh Spy Conference held in September. Page 18
• George Leef reviews the book The Future of Freedom by Fareed Zakaria, and a review of the book Naked Economics: Undressing the Dismal Science by Charles Wheelan. Page 19

• An editorial on the mold problem at North Carolina Central University. Page 20
• Richard Wagner discusses the boozing ways of the employees at the North Carolina Museum of Art. Page 20
• Editorials about the latest Golden LEAF funding initiative, and the latest manifestation of the “Smart Growth” mentality. Page 21
• Michael Walden says that despite the Pillowtex layoffs, consumers shouldn’t forget the benefits of free trade. Page 23

• A CJ parody: State Senate President Pro Tem Marc Basnight will lead a new cheer when asked about the mold problems at NCCU: “Who ya gonna call?” Page 24