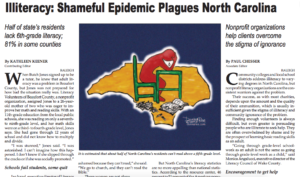 • Illiteracy is still a pervasive problem in North Carolina, and new federal standards are adding pressure to improve student performance. Public schools, community colleges, and nonprofit organizations want to reduce the number of uneducated adults and to prevent the statistics from growing in the future. Page 1

• A “structural pest control training facility” for North Carolina State University was included in this year’s state budget, even though university officials say the project wasn’t a priority. Page 4
• An agency whose budget was slashed in midyear 2002, and was recommended for elimination by the governor this year, was rescued by the General Assembly in the new budget. Page 4
• Author Karl Zinsmeister, on his way to visit the Fayetteville home of new friends he made as an embedded reporter in Iraq, spoke at a John Locke Foundation luncheon in Raleigh. Page 5
• U.S. Rep. Mike McIntyre, D-7th District, joined 32 Republican congressmen Oct. 22 to denounce reporting by “CBS Evening News” that connected homeschooling to child abuse. Page 5

• A new look at what drives the success of Asian-American students offers some perspective on why they outperform other ethnicities. Page 6
• North Carolina’s history and geography curriculum have been revamped, but one group says schools aren’t doing enough to fill the huge gap in young Americans’ knowledge about Asia. Page 7
• Americans would rather reform their own public school than abandon it for alternatives such as transfers or private schools, according to the 2003 Phi Delta Kappa/Gallup poll of American attitudes toward public schools. Page 8

• On Nov. 1 more than 100 academics and scholars gathered in Raleigh to discuss “What Has Become of Standards in Higher Education?” for the annual Pope Center conference. Page 10
• Boston University professor of anthropology and higher education commentator Peter Wood delivered the keynote address at the Pope Center conference. Page 11
• George Leef says raising the cap on the number of out-of-state students who may attend UNC schools isn’t such a great idea. Page 11

• The John Locke Foundation will conduct Innovate 2004: Preserving the American Dream in North Carolina, a conference Jan. 10 that will discuss the consequences of the “smart-growth” movement. Page 14
• Canton is awaiting a ruling from the state Property Tax Commission on the valuation of the town’s largest industry, which will determine whether the town has to raise its property taxes or reduce the services it provides to residents. Page 16
• An interview with Dr. Walter Williams, professor of economics at George Mason University. Page 17

• Associate Editor Paul Chesser examines what John Edwards actually said about the Howard Dean/Confederate Flag flap, and wonders why the senator and presidential candidate got so much play but made so little sense. Page 20
• Editorials on strategies for state budget solutions and on “smart growth” theology. Page 21
• Michael Walden explains the “government spending puzzle,” and says it can be solved. Page 23