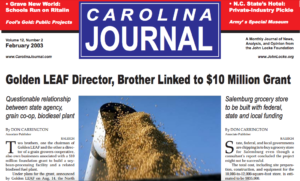 • In August Golden LEAF, led by Chairman S. Lawrence Davenport, awarded $10 million to the North Carolina Grain Growers Cooperative, which is co-run by Davenport’s brother Charles. The decision raised questions about conflicts of interest among LEAF’s board members. Page 1

• A June 2002 study of urban congestion found that cities whose highway construction kept close pace with traffic growth were successful in limiting drive times for commuters. Page 4
• In December a panel appointed by Gov. Mike Easley offered some proposals to make government more efficient, but those looking for magic to make the state’s coming multimillion-dollar budget deficit disappear will find no rabbit in the hat. Page 4
• Government’s use of economic incentives as a tool for luring business is widespread, but a UNC-Chapel Hill professor says little research has been done to measure the success of the enticements. Page 5

• An abundance of overtaxed parents, physicians, and school systems may be responsible for pushing millions of healthy and normal American children into a perpetually drugged-out state. Page 6
• A December 2002 Manhattan Institute report argues that financial incentives available to schools account for a significant portion of the last 10 years’ increases in special-education enrollment, with North Carolina as one of the 33 “bounty states.” Page 7
• Studies conducted by Oklahoma City, Johns Hopkins University, Colorado public schools, and individual schools in Virginia, Texas, and Florida support the view that the broader one’s knowledge and vocabulary, the better and faster one learns. Page 8
• The fifth annual report on schools by the North Carolina Education Alliance shows that many school districts in the state made progress in 2001-’02, but most of the failing school systems still performed in the failing range last year. Page 9

• Before the Council of State was to vote on North Carolina State University’s proposed hotel and conference center in January, university officials asked and received a delay in the vote. Page 10
• Constitutional law scholars at the Cato Institute filed a brief for the U.S. Supreme Court’s consideration in a University of Michigan case that will decide the constitutionality of “affirmative action” policies in student admissions. Page 11
• Despite its defense of academic freedom, the University of North Carolina at Chapel Hill found itself facing a lawsuit threat from a Christian student organization, which said UNC-CH had threatened to revoke its official recognition on campus. Page 12
• In December the Minority Opportunities and Interest Committee of the NCAA sent a letter to UNC-Pembroke seeking an explanation for the university’s continued use of an American Indian logo and nickname (“Braves”). Page 12

• Local-government officials across North Carolina are in a space race as they gear up to spend hundreds of millions in taxpayer dollars to build new convention and civic centers, sports arenas, and other big-ticket public projects over the next few years. Page 14
• An interview with Cabarrus County Commissioner Coy Privette. Page 16

• An editorial on decisions made by Gov. Easley’s Commission to Promote Government Efficiency. Page 20
• Richard Wagner says a prominent Democrat’s call to reinstate a military draft stokes the fires of racial hatred and class warfare. Page 22

• CBS is looking for some “Real Beverly Hillbillies,” so it’s time for the North Carolina Department of Commerce and regional economic development organizations to open up the financial incentive pocketbook. Page 24