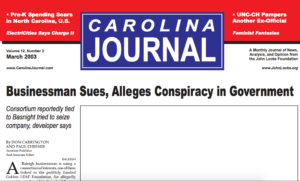 • A Raleigh businessman is suing a consortium of interests, one of them linked to publicly funded Golden LEAF, for allegedly conspiring to keep him from building an ethanol plant in Beaufort County. His accusations include racketeering, extortion, corruption, and conspiracy, which reach “the highest levels of state government.” Page 1

• State governments, including North Carolina’s, are getting into the pre-K business on an unprecedented scale. Assistant Editor Karen Palasek writes that it is important to figure out what deficit the pre-K programs are supposed to correct before it can be understood whether the programs are worthwhile, effective, wasteful, or absolutely essential. Page 6
• Carolina Journal’s Donna Martinez tells of her experience as a substitute teacher in Orange County’s public schools, an atmosphere she describes as “a culture of chaos.” Page 7
• Lindalyn Kakadelis wonders how many more unfunded mandates and nonacademic requirements can be added to the backs of local school systems before they break? Page 7
No stories this issue.

• Is Wake County’s student assignment plan working in the best interests of student achievement? Not according to the group Assignment By Choice. Page 8
• In response to alarming health statistics on obesity, the N.C. State Board of Education adopted a new physical activity policy at its meeting in Raleigh in January. The move incited controversy over who would have the authority to decide exactly how schools carry out the mandate. Page 9

• The news last fall of sweetheart deals to exiting administrators of the University of North Carolina at Chapel Hill placed the institution under unsettling scrutiny of its priorities. Carolina Journal has learned of another lucrative send-off to a UNC-CH official.. Page 10
• In June North Carolina legislators are supposed to receive a study of how the state’s community colleges are funded and how they operate. The study is expected to offer ways to save on costs and streamline operations in the community colleges. Page 11
• George Leef writes that the litigation over race-based admissions is probably the most important case the Supreme Court will decide in its current term, and he hopes the court rules against them without equivocation. Page 11
• Professor Stuart Rojstaczer, a Duke University professor of environmental science, has reinvigorated the national debate over grade inflation. He has compiled data on more than 50 colleges and universities nationwide showing how average grade-point-averages at them over time have risen. Page 12
• Jon Sanders says UNC-CH has shown the world what it is to be a great, free, American public university, but he wonders how vigorous UNC-CH’s defense of free expression and inquiry is. Page 13

• Electrical customers in eastern North Carolina served by ElectriCities have experienced steep increases in their bills in recent months, and high rates are likely to continue for the foreseeable future. Those communities are paying the price now for poor decisions in the 1970s and early 1980s. Page 14
• Proponents of urban “smart growth” initiatives espouse policies that excessively restrict the rights of citizens, says Wendell Cox, a nationally known demographic and transportation expert who visited Raleigh recently. Page 15

• The John Locke Foundation’s Dr. Roy Cordato says North Carolina’s fiscal crisis is neither a surprise nor an accident; it is the result of poor decisions by lawmakers who have ignored the long-term consequences of their spending promises. Page 20

• Golden LEAF announced that as part of an economic stimulus package, the foundation will subsidize a McDonald’s restaurant for any North Carolina town that does not yet have one. Page 24