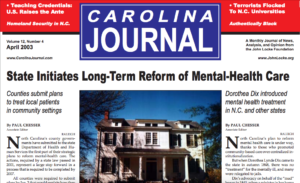 • North Carolina’s county governments have submitted to the state Department of Health and Human Services the first part of their strategic plans to reform mental-health care. The actions, required by a state law passed in 2001, represent a large step forward in a process that is required to be completed by 2007. Page 1

• A Raleigh businessman withdrew a preliminary motion for a lawsuit he had filed against a group of businessmen in which he alleged they interfered with his plans to build a fuel ethanol plant in Beaufort County. Page 4
• Thomas Jefferson and Patrick Henry were more good-natured debaters than avowed combatants at a dinner sponsored by the John Locke Foundation last month. Page 4
• Fred Barnes of the Fox News Channel, speaking to an audience at the John Locke Foundation’s 13th anniversary dinner Feb. 28, rebutted several common arguments against a war with Iraq. Page 5

• Under the No Child Left Behind Act, teachers in North Carolina will have to meet tougher hiring and retention standards, in the form of additions to existing requirements. Page 6
• North Carolina is only a ‘partly free state’ says Dr. Jay Greene, because the state ranks only 27th in the nation on his Education Freedom Index. Page 7
• Lindalyn Kakadelis offers her top 10 reasons why end of grade tests — not just results — should be released to the public. Page 7
• Disappointing academic results have led to closer scrutiny of 21st Century Community Learning Centers, the nation’s largest federally funded after-school program. Page 8

• The war on terrorism is being waged abroad, and for North Carolinians some of its biggest news strikes surprisingly close to home, with several arrests of suspects who attended college in the Tarheel State. Page 10
• Last fall Shaw University fired a professor for “disloyalty” and evicted a student from campus housing over a faculty resolution criticizing Shaw President Talbert O. Shaw and the Board of Trustees. Page 11
• In late February a federal commission released its final report on recommendations on reforming the enforcement of Title IX of the Education Amendments of 1972. Page 12

• State and local emergency management professionals are waging a war on terrorism at home as the nation’s terror alert sits at “high.” Page 14
• In addition to aggressive Charlotte, many other North Carolina municipalities regularly annexed in the 1990s. Page 15
• Hayward County officials are working to correct a major error in property revaluations, but it may be some time before taxpayers get a refund. Page 16
• An interview with Michael Byrne, executive director of the North Carolina chapter of the Institute for Justice. Page 17

• Kory Swanson reviews the book Authentically Black: Essays for the Black Silent Majority by John McWhorter. Page 18
• Reviews of the books Vouchers Within Reason: A Child-Centered Approach to Education Reform by James G. Dwyer, and The Lochner Court, Myth and Reality by Michael J. Phillips. Page 19

• An editorial on the excessive number of vehicle fees and taxes in North Carolina. Page 20
• Michael Walden says clouds have covered the North Carolina economy for most of the past two years, but before the recession hit, the state’s economy was prospering by any reasonable standard. Page 22

• “Trading Open Spaces,” one of the hottest shows on cable television, comes to Raleigh to film a segment featuring two couples, one famous and the other representing the less-fortunate masses. Carolyn and Jim meet Jane and John in this landscaping special. Page 24