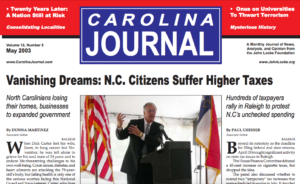 • Tear-jerking stories about victims of cuts in the state budget are commonplace in the media these days. Now read about some real-life North Carolinians who suffer from an onerous tax burden. Page 1

• The director of a Warren County substance abuse program that has received at least $1.8 million from taxpayers refuses to release public financial records. Page 4
• In an apparent violation of North Carolina Public Records Law, an economic development agency refuses to release information on some of its operations. Page 4
• Calling himself “an equal opportunity offender,” editorial cartoonist Doug Marlette spoke at a John Locke Foundation luncheon on March 31 in Raleigh. Page 5

• The National Commission on Excellence in Education reported in 1983 that the “intellectual, moral and spiritual strengths of our people” were in trouble. The follow-up study examines the changes that have taken place since then. Page 6
• The Wake County Board of Commissioners approved a resolution to increase the number of charter schools. Page 7
• Sen. Steven Metcalf presented a bill that would prevent introducing new standardized tests into North Carolina schools unless they are required by the No Child Left Behind Act. Page 7
• Lindalyn Kakadelis writes that the complicated, course-driven teacher certification process is often the greatest barrier preventing some of the best people from choosing the teaching profession. Page 7

• The effects of the war on terror and the aftermath of Sept. 11 on universities have been subtle but significant. In some respects, universities have been asked to contribute to U.S. security efforts in ways other sectors could not. Page 10
• Inspired by Saddam Hussein statues falling across Iraq, a professor at UNC-Chapel Hill has called for the toppling of a Confederate monument on campus. Page 10
• The March 2003 issue of Carolina Review advertises “The Best of Carolina.” These are, according to the conservative staff, the best courses that the University of North Carolina at Chapel Hill has to offer. Page 11
• Leftists comprise only 10 percent of the American population yet wield a disproportionate amount of power because of attention their positions in society garner, author Dan Flynn says. Page 12

• Consolidation, the buzz word circulating in a few regions of North Carolina, is much easier said than done, some city and county officials are finding out. Page 14
• The Rocky Mount City Council is expected to raise the city’s property tax rate in the coming fiscal year to fund new arts and athletic facilities. Page 16
• An interview with Dick Armey, former House majority leader and the new cochairman of Citizens for a Sound Economy. Page 17

• Andrew Cline reviews the book Worlds Together, Worlds Apart by Robert L. Tignor; and a review of Dependent on D.C.: The Rise of Federal Control Over the Lives of Ordinary Americans by Charlotte Twight. Page 18
• Reviews of the books Rethinking the Great Depression by Gene Smiley, and Equal Rights for All. Special Privileges for None by Thomas E. Vass. Page 19

• Michael Lowrey writes that Gov. Mike Easley’s proposal to issue $700 million in bonds illustrates systematic problems in North Carolina’s transportation program. Page 20
• Donna Martinez writes that whoever came up with the phrase “unmet needs” is a brilliant political strategist but the taxpayers’ great nemesis. Page 22
• Michael Walden writes that a tactic used by many households is to save money in good economic times and draw on these funds when the economy turns bad—an idea that is being debated for North Carolina’s budgets. Page 23

• Jon Sanders’s mole has uncovered what might be UNC-CH’s book selection for this year’s Summer Reading Program. Page 24