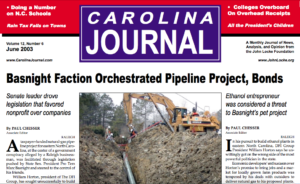 • A taxpayer-funded natural-gas pipeline project for eastern North Carolina, at the center of a government conspiracy alleged by a Raleigh businessman, was facilitated by State Sen. President Pro Tem Marc Basnight and steered to the control of friends under his direct influence. Page 1

• U.S. Rep. Frank Ballance, D-1st, has come under scrutiny because hundreds of thousands of taxpayer dollars went to a nonprofit counseling center he started, but the organization has failed to file reports required by state and federal law. Page 5

• For a man whose passion is statistics, Dr. William Sanders has devoted much of his career to education, and now has spent the last 21 years putting both together with his unique student evaluation method. Page 6
• The success in the Supreme Court for voucher advocates hinged in large part on the legal concept of true private choice. Now that the federal question has been answered, has the door to voucher programs in the states been opened? Page 7
• In 1999, Salisbury native Julian Robertson, Founder of Tiger Management, contributed $1.5 million to start Children’s Scholarship Fund-Charlotte. In July, CSF–Charlotte will become its own nonprofit. Page 7
• In 1875 a proposed amendment to the Constitution would have prohibited public school lands or tax funds from being divided between religious sects or denominations. The amendment failed, but today such provisions exist in 37 state-level constitutions. Page 8
• As North Carolina heads into the compliance phase of the No Child Left Behind education law, accountability experts must decide which students can legitimately be excluded from testing. Page 9

• Last year schools in the University of North Carolina system received $123.6 million in “overhead receipts” from federal research grants, which state legislators would like to see go to the general budget. Page 10
• The latest case championed by the North Carolina Chapter of the Institute for Justice involves two cherished traditions in the state, freedom and sports. It also concerns a rapidly evolving form of journalism: online news media. Page 11
• Unethical behavior is rampant on college campuses and in society today, the director of the Kenan Institute for Ethics at Duke University said at an luncheon sponsored by the John Locke Foundation on April 28. Page 12
• The Daily Tar Heel April 24 reported that “A woman is raped every two minutes,” but no sources for this information were given — mildly surprising since UNC-CH has a well-respected school of journalism. Page 13

• For state residents, rain and its runoff have become yet another excuse for cities and towns to raise taxes. Page 14
• N.C. Department of Transportation officials are examining the possibility of rebuilding Interstate 95 through toll collections under a federal pilot program, but it will be several years before anyone pays to drive on the interstate. Page 15
• An interview with Fern Shubert, state senator from Union County. Page 17

• Reviews of All the President’s Children: Triumph and Tragedy in the Lives of America’s First Families by Doug Wead, and The New White Nationalism in America: Its Challenge To Integration by Carol M. Swain. Page 18
• A review of Bountiful Harvest by Thomas R. DeGregori, and a look back at Ayn Rand’s The Fountainhead. Page 19

• An editorial on the record of Mike Easley as governor. Page 20
• Michael Walden tells how North Carolina got into its budget problems. Page 22
• Richard Wagner says another of the bad ideas that refuse to die is the “Dream Act,” which allows illegal immigrants to enjoy privileges without earning them. Page 22

• Paul Chesser offers solutions the state can implement to stave off the latest threat to fairness in life: “Fat-finger dialing.” Page 24