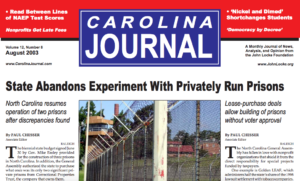 • In the just-passed budget, the legislature authorized the state to purchase what once was its only two significant private prisons from the property trust company that owns them. The budget provisions signaled that the state plans to get out of privatization and will operate prisons itself for the foreseeable future. Page 1

• Fourth- and eighth-grade reading scores from the National Assessment of Educational Progress were released in June, and Easley and other state officials celebrated the results at a press conference at Green Hope Elementary School in Raleigh. Page 7
• Karen Palasek writes that when the 2002 NAEP reading scores were released in late June, state education officials made an extraordinary effort to put a positive spin on the results. Page 7
• Students at two North Carolina elementary schools, which have a high percentage of children in the federal nutrition-assistance lunch program, have made extraordinary progress in academic achievement in recent years. Page 9

• The Supreme Court in June ruled on racial preferences in college admissions, and the decisions in Gratz v. Bollinger on preferences used by the University of Michigan, and Grutter v. Bollinger on preferences used by its Law School, brought little clarity to the issue. Page 12
• Jon Sanders writes that next to “diversity” a favorite euphemism at universities today is “critical thinking.” The usual occasions for its use, he says, are rather ironic — to stymie rather than stimulate critical thinking. Page 13

• A local taxpayer group is calling for a review of a controversial City of Wilson grant program that has distributed about $6 million in utility bill late fees to nonprofit cultural and social service groups during its 14-year history. Page 14
• For the first time in 14 years, the General Assembly has added to the number of the projects to be paid for through the Highway Trust Fund. Page 15
• The N.C. Supreme Court upheld a lower-court ruling that employment discrimination regulations adopted by the Orange County Human Relations Commission are unconstitutional. Page 16

• Richard Wagner writes that the anti-fat fanatics are bombarding Americans with a subliminal message: An individual — irresponsible slob that he is — no longer can be trusted to care for his own body. Page 20
• An editorial on emergency management services and how some counties use private providers while others rely on public-funded departments. Page 21
• George Leef wonders why universities worship race as the only factor to determine diversity. Instead, they should junk diversity and admit the brightest students. Page 21

• Jon Sanders offers a handy flowchart that helps the masses understand why UNC can’t afford to cut ANYTHING. Page 24