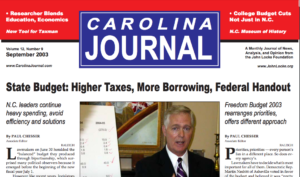 • What was the General Assembly’s solution to the state’s budget problems this year? Higher taxes, onetime money, more borrowing and ignoring efficiency ideas seemed to be the answers. Page 1

• Two reports released in August conclude that North Carolina’s primary job creation program, the William S. Lee Act, rarely creates any jobs. Page 4
• The length of time for copyright protection, which exceeds 100 years in most cases, is excessive and society would benefit if the period were shortened, the dean of the Barton College School of Business says. Page 5
• Approval of the state budget June 30 also marked the beginning of the fulfillment of a $10 million promise made by state House Cospeaker Jim Black to a culinary arts school that planned to establish a campus in Charlotte. Page 5

• The NC Charter School Conference held in New Bern carried the theme “NCLB,” a reference to both the No Child Left Behind Act, and an acronym for “Nurturing, Challenging, Learning & Believing in all children.” Page 7
• Lindalyn Kakadelis writes that the State Board of Education’s meeting in August confirmed that its unqualified core value is that the “system” is more important than the child. Page 7
• Three different testing standards — the National Assessment of Educational Progress, the state ABCs, and the federal No Child Left Behind Act — are creating confusion and frustration over accuracy in North Carolina. Page 8
• Now that high-stakes testing has begun in North Carolina, parents and policy makers want to know whether the process is working to improve student performance. Page 9

• A recently released report found that North Carolina’s institutions of public higher education are hardly the only ones in the nation affected by an economic downturn in their home state. Page 10
• One of the last actions of the General Assembly before the legislative session ended was to pass a bill that increases eligibility for a state grant that also ended what some have labeled a discriminatory practice. Page 11
• Like its public rival at University of North Carolina at Chapel Hill, Duke University is requiring its incoming students to read a controversial book this summer: Jonathan Kozol’s Savage Inequalities: Children in America’s Schools. Page 12

• Finance officials in local government offices around the state are praising a relatively new and little-known debt collection program that has helped clear their books of more than $1.2 million in bad debts from thousands of North Carolinians. Page 14
• Six North Carolina cities are proposing incentives of $5.4 million to help establish additional airline service. Page 15
• Many landowners along the border between Orange and Chatham counties remain uncertain what their county of residence is, 14 years after the counties agreed to redraw their border. Page 16
• An interview with U.S. Rep. Richard Burr of North Carolina’s 5th District. Page 17

• An editorial on predatory politicians and what Roy Cooper can do about them. Page 20
• Donna Martinez writes that none of us should be surprised, but all of us should be concerned by some of the appalling results of a survey conducted by the North Carolina Civic Education Consortium, released earlier this year. Page 22

• A student from UNC-Chapel Hill writes an open letter to North Carolina’s taxpayers, expressing anguish about his recent interaction with state government. Page 24