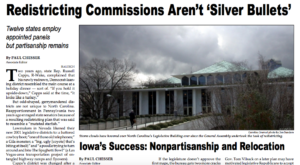 • Is the appointment of an independent redistricting commission the solution to breaking North Carolina’s unrelenting conflicts over the process in the General Assembly? A look at other states with such panels doesn’t produce optimism. Page 1

• A precedent set in July by the N.C. Supreme Court enabled a Lumberton family to win a quick resolution in a dispute with social workers. Page 4
• Allyson Duncan, a former member of the North Carolina Utilities Commission who left in 1998, a year before the end of her eight-year term, represented a newly formed gas authority before the commission within months after resigning. Page 5

• The Phi Delta Kappa/Gallup poll on public attitudes toward public education hinted at it, and two studies now confirm the public’s intuition about school spending: We aren’t getting the achievement “bang for the bucks” we’re spending. Page 6
• Under the federal No Child Left Behind law, teaching professionals must meet specific criteria for their credentials. North Carolina hasn’t met its own targets for 2003-04 yet, but it has made substantial progress in some areas. Page 7
• Lindalyn Kakedelis writes that unions’ monopolistic control of the teacher education market doesn’t lead to educational freedom. Page 7
• The latest changes in test reporting from the College Board are gathering both approval and protest from education policy analysts and test takers. Page 8

• On Nov. 10 the University of North Carolina at Wilmington derecognized the College Republicans student group, freezing its funds and disallowing its use of campus facilities. Page 10
• College textbooks published in the United States but exported to booksellers overseas are in many cases cheaper for students to “reimport” than it is for them to buy from domestic booksellers. Page 12
• Jon Sanders writes about an ethics complaint against Sen. Edward Kennedy by Judicial Watch, which alleges that Kennedy obstructed the confirmation of a judge until after racial-preferences cases concerning the University of Michigan and its law school were decided. Page 13

• Accessing North Carolina’s seaports in Wilmington and Morehead City will get more complicated over the next few months, but the short-term inconveniences will lead to physical and technological improvements state and local officials believe are necessary for long-term security from terrorists. Page 14
• A John Locke Foundation report highlights the increasing burden local governments in North Carolina place upon taxpayers through increased taxes and fees. Page 15
• The Durham City Council adopted a tough new ordinance that restricts where, how, and what people can sell at intersections in the city, and panhandling is also covered by the ordinance. Page 16
• An interview with Virginia Postrel, New York Times economics columnist. Page 17

• A review of the book Life at the Bottom: The Worldview That Makes the Underclass by Theodore Dalrymple. Page 18
• Reviews of the books Economics for Real People: An Introduction to the Austrian School by the Ludwig Von Mises Institute by Gene Callahan, and Houston Freeways: A Historical and Visual Journey by Eric Slotboom. Page 19

• Richard Wagner asks whether a recently approved package of “incentives” for corporations is about the economy, or about stupidity. Page 20
• Donna Martinez writes that for those who believe government programs are the answer to solving social problems, the 2003 North Carolina Child Health Report Card is a reason to celebrate — at least that’s what its authors want you to think. Page 23