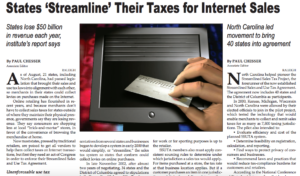 • As of August, 21 states, including North Carolina, have passed legislation that brings their sales and use tax laws into alignment with each other, so merchants in their states can collect levies on purchases made via the Internet. Page 1

• A federal indictment of former U.S. Rep. Frank Ballance also alleges that others cooperated with him in questionable financial transactions, one individual being State Sen. Robert Holloman. Page 4
• State Rep. Paul Luebke, D-Durham, introduced a bill earlier this year that would prohibit consultants who advise the state on economic incentive programs from advising businesses on how to obtain incentives under those programs. Page 5
• Retired Raleigh lawyer Bernard Harrell has asked the State Board of Elections to investigate Attorney General Roy Cooper’s political campaign for not reporting in-kind contributions from nine attorneys and their law firms. Page 5

• High-level administrators at the North Carolina School of the Arts engaged in “willful, deliberate and intentional” violations of North Carolina law in what State Auditor Ralph Campbell described as “similar to the debacle at Enron.” Page 10
• With universities focused on multicultural and cultural-diversity requirements, a nationwide movement has grown to try to bring the traditional liberal arts and Western civilization back to academe. Page 11
• After a search marked by secrecy, North Carolina State University has a new chancellor — someone who is quite familiar with the institution. Page 12
• George Leef explains how the University of North Carolina at Chapel Hill could show real leadership among universities. Page 12

• The Alamance County Board of Commissioners rescinded its approval and prohibited its county manager from investigating a public-private partnership that could create a multimillion-dollar revenue stream for the county. Page 14
• Even by the standards of North Carolina’s largest city and county, Charlotte and Mecklenburg County have recently faced a large number of requests for assistance in financing high-visibility projects. Page 15
• One of North Carolina’s fastest growing counties, Cabarrus County, is quadrupling its home-building fee. Page 16
• An interview with Alan Charles Kors, cofounder of the Foundation for Individual Rights in Education. Page 17

• A review of the book Against Leviathan: Government Power and a Free Society by Robert Higgs. Page 18
• Reviews of the books Protecting America’s Health: The FDA, Business, and One Hundred Years of Regulation by Philip Hilts, and Government Failure: E. G. West on Education by James Tooley and James Stanfield. Page 19

• Roy Cordato writes that the Selective Service System would be more likely revived under a Democratic administration rather than under a Republican administration. Page 20
• An editorial on recent court decisions affecting economic development incentives and private property rights. Page 20

• CJ parody: Given the plight of Yankees in North Carolina, UNC-CH proposes a minor in Yankee Studies. Page 24