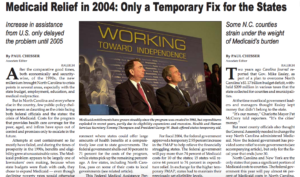 • In North Carolina and everywhere else in the country, a sense of hopelessness exists for a shared federal-state crisis: Medicaid. Costs for the program that provides inexpensive health-care coverage for the poor, aged, and infirm has spun out of control, and promises only to escalate in the future. Page 1

• CBS News President Andrew Heyward, in response to a complaint by 33 congressmen who alleged that the network’s broadcasts Oct. 13 and Oct. 14 reflected poorly on homeschooling, defended the reports that connected child abuse to the growing educational movement. Page 4
• Contrary to “widespread and persistent stereotypes,” most American adolescents are not alienated from or hostile toward organized religion, and as much as two-thirds of those youth closely agree with the religious beliefs of their parents, a UNC-Chapel Hill study says. Page 4
• North Carolina Attorney General Roy Cooper in December 2003 notified seven states that he will petition the Environmental Protection Agency to seek greater restrictions on pollutants in those states. Page 5

• Educating the “whole child” is the theme of the latest spin on the North Carolina elementary curriculum, which is worth browsing for insights into the trendy new direction that K-5 education is headed in the state. Page 6
• According to data collected from the National Longitudinal Study of Adolescent Health, the incidence of sexual activity, drug-alcohol use and abuse, delinquent behavior, and violence are just as common in suburban high schools as in urban ones. Page 7
• Ninth grade is a make-it-or-break-it year for high school students, according to the National Association of Secondary School Principals. Page 8

• A student in Professor Elyse Crystall’s “Literature and Cultural Diversity” class at the University of North Carolina at Chapel Hill was accused of making “violent, heterosexist comments,” and uttering “hate speech” in class. Page 10
• George Leef writes that if UNC-CH had a bigger budget, it might be able to win more bidding wars against other prestigious universities, but that wouldn’t make it any better for students. Page 11
• North Carolina is the unhappy home to the nation’s first outbreak of HIV among college students, according to research presented before the 11th annual Conference on Retroviruses and Opportunistic Infections in San Francisco. Page 12

• A proposed turnpike connecting Gaston and Mecklenburg counties will likely be the first toll road built and operated by the North Carolina Turnpike Authority, according to two sources familiar with the project. Page 14
• Chad Adams writes that in the absence of facts, elected officials “buy into” whatever planners say will benefit downtown areas. Page 15

• George Leef reviews the book Mugged by the State, by Randall Fitzgerald. Page 18
• Reviews of the books In Denial: Historians, Communism & Espionage by John Earl Haynes and Harvey Klehr, and The Road to Serfdom by F.A. Hayek. Page 19

• Paul Chesser writes that if Mel Gibson’s controversial new movie, “The Passion of the Christ,” is genuinely Scriptural, then it can’t possibly be anti-Semitic. Page 20
• An editorial on economic incentives and the need to open government records that reveal details behind the deals. Page 20
• John Hood says Ernst & Young study about North Carolina’s business taxes misses the boat. Page 21
• Michael Walden writes that when it comes to job outsourcing, we need to remember that the door also swings the other way with foreign companies moving jobs here. Page 23

• CJ parody: UNC system students, terrified at the thought of tuition increases of up to $300 annually, put together a compilation of their personal hardship stories. Page 24