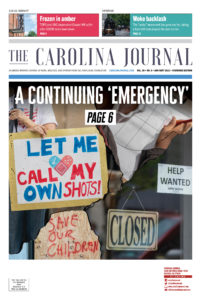 This summer has been one of reflection and recovery after last year’s runaway train of riots and pandemic panic. At Carolina Journal, we’re examining and debating the hard issues our nation and state have faced over the past 18 months. Whether your challenge has been a closed business, a closed school, or closed minds in your community, we are starting to see “open” signs light up.

Over the past month, I’ve felt the momentum of those who see that liberty, equality, and capitalism, the foundational values of this nation, are at risk. They are fighting back. In this issue of CJ, we examine the fight and where it is taking us.

Among the real debates we’ve faced as a society is discrimination, whether it’s based on race, gender, heritage, or even vaccine status. This legislative session a constitutional amendment is being considered that would make the Civil Rights Act of 1964 a permanent part of the N.C. Constitution. Senate Bill 729, The Public Nondiscrimination Amendment, would ban the state or a state agency from discriminating against “or grant preferential treatment to any individual or group on the basis of race, sex, color, ethnicity, or national origin in the operation of public employment, public education, or public contracting.”

I’ve repeatedly heard opponents of the measure try to redefine it as a “ban on affirmative action,” betting they can shift the public message on the bill to perceived racism, rather than the bill’s core purpose, ensuring equal access to opportunity. We see the same efforts in the addition of “equity” to the political playbook, rather than “equality.”

The idea government at any level would institutionalize or promote discrimination against anyone is so far removed from our values as a nation and current demands for reform that one must wonder about the real goals of opponents. Either you want equal access to the American dream and all that is required to achieve it, or you don’t.

The fight over Critical Race Theory is based on exactly this question. With the impending August release of Lt. Gov. Mark Robinson’s FACTS task force commission report, supporters of CRT are already polishing their message. They discount opposition to CRT, calling it “manufactured rage.” I assure you the passionate reaction I see everywhere from coffee shops to school board meetings is not manufactured by some nameless political group. It’s a groundswell triggered in part by parents who spent the last year of remote school seeing firsthand what their kids are studying and how.

CRT is creeping into the classroom, not as an overt lesson or chapter. I would support the idea of teaching it as critical thinking exercise, along with the brilliance of our founding documents, the arrival of those fleeing religious persecution, the sacrifices of the Greatest Generation, the fight of the civil rights movement, and the horrors of the enslaved throughout history. Rather, CRT is coming in through the back door, training the trainers to blanket the school day with it. Teaching from an angle does not develop critical thinking skills students need to lead our nation and compete in an increasingly global market. With inflation on the rise, they will need every advantage we can provide, and a solid, fact-based education is mandatory.

If there’s a silver lining in COVID shutdowns, it’s that many of us have a renewed appreciation for personal liberty because it has been threatened this year. It will take a fight to recover and preserve it. From reclaiming your right to open your business, maintain your privacy, know what your kids are learning, or feel confident your government will not discriminate against you, the big questions lie before us.