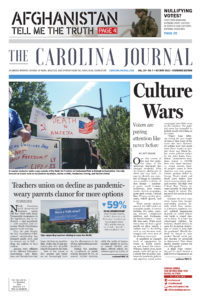 At Carolina Journal we have been covering N.C. news for more than 20 years. More than ever, we see the blurring lines between strategic messaging and healthy debate, individual freedom, and governmental mandates. When you dig into our work you will find compelling stories about real people fighting for their own rights, and yours, in what has become a culture war. Whether it is college students demanding a well-rounded education, parents fighting for authority to make medical decisions for their own children, or a Fort Bragg soldier sacrificing for others in Afghanistan, American courage runs deep here in North Carolina, and it is needed right now.

In this issue of Carolina Journal, we examine the culture wars being fought in classrooms, boardrooms, and battlefields. Imagine if someone told you in 2018 that Americans would soon be forced to vaccinate themselves or face losing their job, the right to be in public, or attend school. Imagine hearing that Americans, allies, service dogs, and billions in military hardware would be abandoned in Afghanistan in a chaotic retreat. Could you have anticipated that American parents would fear for their child’s future because schools closed for an entire year, or the U.S. Capitol would be rushed by voters enraged by the results of a presidential election?

Just as it was during 9/11, this is a transformative time. Attitudes are shifting, people are becoming more aware of public policy and international events. However, during 9/11 the events unfolded suddenly and there was a clear enemy and crime. This time, the lines are blurred, and people are taking sides, expanding the power of government at the expense of individual freedom. The gradual erosion of liberty is boiling us like lobsters.

Now freedom truly is one generation away from extinction, and the battlefront is not just at the ballot box, it is in all three branches of government.

On taxpayer-paid college campuses, students and staff are required to take Critical Race Theory-based training while students who speak out against biased lectures are ridiculed by teachers. Parents fight for the right to make private medical decisions for their own children in an environment free of politics and government pressure. In Afghanistan, Americans were horrified to witness a chaotic and deadly evacuation.

But here is the thing: People see what is happening. Kindergarteners are required to wear masks in classrooms, while thousands of cheering people pack football stadiums. Celebrities are shoulder to shoulder at awards shows amid claims that vaccines are not as protective, and Gov. Roy Cooper mandates vaccines for state workers. Vice President Kamala Harris, who once said she would not take a vaccine developed under leadership of the last administration, is now advocating vaccine mandates.

The overreach and mixed messaging of government during COVID has eroded public trust in our institutions, cost lives, and made liberty fighters out of once disengaged people.

Capitalizing on these trends, left-leaning media outlets and corporations are turning hard left and trying to drag culture with them. Now, 20% of youth believe socialism is worth trying. It is considered acceptable among some teachers to tell kids that their value and potential is tied directly to their race and gender.

All of this is motivating a growing base of people for whom common sense, rather than fear, prevails. They may never march with a sign or run for office — but they are watching, learning, and fighting for change in their corner of the state. At Carolina Journal, we are committed to bringing you their stories.