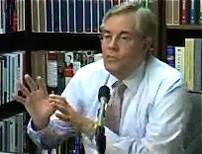 It is common to hear the phrase ‘academic freedom’ thrown about as a defense whenever we hear about controversial behavior or statements coming from a university professor. But exactly what is that? George Leef of the Pope Center for Higher Education Policy explains the concept, how it has been used, and the debate over when it is and isn’t appropriate. Next, North Carolina government leaders continue to use targeted tax breaks to lure companies to this state, including the recent multimillion-dollar package designed to attract an Apple data center. They say they need the tax incentives to compete for new jobs. But Scott Hodge, president of the Washington, D.C.-based Tax Foundation, says North Carolina is losing a more important competition by maintaining overly high tax rates. Then we turn to criminal justice. The most hardened criminals belong in prison, but long stints behind bars do not work as well for some other offenders. That’s the stance of Doug Lance, executive director of Alternative Community Penalties Program, which serves Gaston, Cleveland, and Lincoln counties. Lance says sending some offenders to prison wastes taxpayer money while failing to address the problems that caused the offenders to commit crimes. That’s followed by a look at redistricting. North Carolina’s General Assembly has the power to limit our freedom and take our money through taxation. Under current law, the legislature also has power to draw the maps that decide who votes for each lawmaker in the House and Senate. Some legislators believe the General Assembly should surrender that power. You’ll hear arguments for an independent redistricting commission from Sen. Pete Brunstetter, R-Forsyth, and Reps. William Current, R-Gaston, and Nelson Dollar, R-Wake. And finally, we turn to cries from educators over proposed cuts to the state’s K-12 education budget. Supporters of the status quo say the cuts would devastate North Carolina’s progress and result in massive teacher layoffs. Are those claims true? JLF’s education policy analyst Terry Stoops weighs in on the arguments and offers his priorities for what should be retained and what could reasonably sustain cuts as the state struggles to fill a $4 billion budget hole.