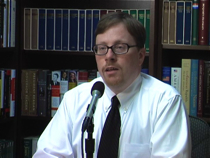 Much of the recent media coverage about the release of the state’s ACT scores has centered on the fact that scores declined from last year. The decline was a predictable result since North Carolina now requires all 11th grade students to take the ACT. Dr. Terry Stoops, the John Locke Foundation’s director of research and education studies, explains why the big news from the scores is how poorly North Carolina fares when compared to other states in which the vast majority of students took the test. He also comments on why our state’s students have a history of doing well in the subject of math. Next, as summer turns to fall, experts such as N.C. State University professor Michael Walden are sifting through data to estimate what lies ahead for the North Carolina economy. Walden shares his analysis, including the likely impact of tax changes approved in the 2013 session of the N.C. General Assembly. Then we turn to education policy. Among the most high-profile skeptics of new Common Core public school standards is Lt. Gov. Dan Forest, who has shared his concerns as a member of the N.C. State Board of Education. Forest discusses the recent response he’s received to his list of 67 questions about Common Core. That’s followed by a look at North Carolina history. When you picture the fighting in World War II, it’s likely that you think about Europe, the Pacific, or even North Africa. Historian Kevin Duffus has documented in his book War Zone the impact of WWII fighting closer to home. Duffus discusses how the war affected the North Carolina coast. And finally, Big Education bureaucrats continue to criticize the state’s legislature for what they say is too little funding for the K-12 classroom and too little pay for teachers. Carolina Journal Managing Editor Rick Henderson responds to specific comments made by one of the leaders of the state’s teacher union/association and explains why comments comparing teacher pay to that of fast food workers are unfounded.