Alarmists March On, Despite Climategate Scandal 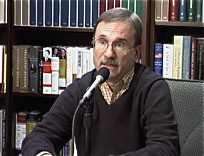 Advocates for a global treaty on climate change converged on Copenhagen for two weeks of discussions about how to save the planet on what they say are impending catastrophic effects of global warming. John Locke Foundation Vice President for Research Roy Cordato weighs in on why the conference took place with little or no talk about serious questions over possible manipulation of data by well known climate alarmists. Then we turn to growing unrest among fiscal conservatives across the country. Tax hikes, bailouts, and the potential takeover of American health care have convinced more people that government has grown too big. Hundreds of concerned North Carolinians gathered recently near the State Capitol to share their worries about government overreach. They heard from former U.S. House Majority Leader Dick Armey, who explained why freedom works better than government programs in promoting prosperity. Next, high-profile state government scandals in recent months have helped scuttle at least one out-of-state fact-finding trip for a legislative study group. Leaders of a committee looking into offshore energy options had hoped to travel to Louisiana. After learning that legislative leaders would not spend taxpayer dollars on the trip, the group dropped proposals to seek private funding. You’ll hear highlights from their discussion of the potential bad publicity a ‘junket’ could generate. That’s followed by a look at the future of journalism. The traditional for-profit model of journalism is declining. Jay Hamilton, a public policy professor at Duke University and director of the DeWitt Wallace Center for Media and Democracy, has been studying other models that might thrive in the future. He’ll discuss the role of nonprofit newspapers in future media coverage. And finally, John Locke Foundation education policy analyst Terry Stoops explains why some public school officials are upset over a recent court ruling, and why recent moves by the State Board of Education will negatively impact public charter schools.