All Eyes On Races For Governor and US Senate Seat 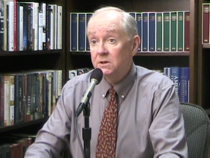 With North Carolina’s primary election moved up from May to March 15, 2016, candidates for office are under the gun to decide if a run for office is really in their future. Announcements have come in on two key races. Carolina Journal Managing Editor Rick Henderson profiles the dynamics of the races for North Carolina governor and the U.S. Senate seat now held by Richard Burr. Then we turn to a discussion of philosophy and policy. People concerned about jobs, health, and other signs of a thriving society ought to be concerned about freedom. That’s one key message from Joseph Connors, assistant professor of economics at Saint Leo University in Florida. Connors has worked closely with the economists responsible for preparing the Fraser Institute’s annual rankings of economic freedom worldwide. Next is a look at recent legislative action. One of the last pieces of business for this year’s N.C. legislative session involved regulatory reform. You’ll hear highlights from state House debate over measures designed to roll back unnecessary rules that hamper economic growth. That’s followed by recommendations made by the General Assembly’s Program Evaluation Division. The group is taking aim at existing state programs designed to help government workers buy supplemental insurance. Program evaluators say the existing programs have proved ineffective. They recommend a centralized approach as a way to secure better deals for workers. You’ll hear legislative reactions to the proposals. And finally, we look at the use of incentives by North Carolina’s largest cities. They offer the benefits under the guise of generating economic growth. The John Locke Foundation’s Director of Fiscal Policy Studies, Sarah Curry, provides the results of her new report on how the 13 largest cities are using the taxpayer funds with little transparency.