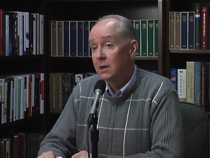 Gov. Pat McCrory has begun his second year on the job as the state’s CEO, so what are his priorities for 2014? Carolina Journal Managing Editor Rick Henderson analyzes comments the governor made at a recent press conference, in which he discussed the need to spur job creation, to implement a 24-year transportation strategy, to get into the offshore drilling business, and to give teachers a raise. You’ll also hear the governor’s own words about his education priorities, along with reaction and analysis from Terry Stoops, John Locke Foundation director of research and education studies. Next is a look at the state judiciary. North Carolina has won kudos from corporate America for the development since 1996 of its specialized business court. But chief business court Judge John Jolly recently warned lawmakers that the Tar Heel State might need to expand the number of business court locations to keep with the volume of cases in North Carolina and competition from business courts in other states. You’ll hear highlights from his remarks, along with legislative reaction. That’s followed by comments about energy made by a nationally known former federal official. If you’ve never heard of an “electromagnetic pulse,” former CIA Director James Woolsey hopes to change that situation. During a recent trip to Raleigh, Woolsey urged North Carolina lawmakers to take steps to protect the state’s electric grid from an EMP, which could devastate the state and national economy. And finally, Katherine Restrepo, the Locke Foundation’s health and human services analyst, looks at criticism of governor for his decision not to expand Medicaid, which is an option under the Affordable Care Act. Restrepo talks about her recent testimony on the topic before a state panel looking into ideas for reforming the Medicaid system.