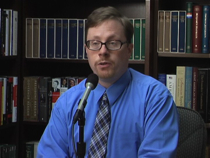 North Carolina’s four-year high school graduation rate is up, but what’s inside the numbers? Do they reflect greater student achievement? John Locke Foundation Director of Research and Education Studies Terry Stoops delves into the numbers and the changing reasons for them given by education officials. It’s not just the graduation rates that are making news. So are the public school standards tied to the Common Core initiative. They’re raising a number of questions for parents and education advocates. The North Carolina Institute for Constitutional Law has prepared a series of five papers outlining legal and constitutional questions tied to Common Core. NCICL executive director Jeanette Doran discusses her group’s primary concerns. Next is a look at history. When asked to identify the most important elements determining the outcome of a battle, it’s unlikely that music comes to mind. But Bill Stallings, a veteran of North Carolina Civil War re-enactments, recently explained for the John Locke Foundation’s Shaftesbury Society how buglers played a critical role for both sides in the war that tore apart the United States 150 years ago. That’s followed by a look international economics and history. Russia is blessed with an abundance of natural resources. But Yuri Maltsev, Carthage College economist and former economics adviser to Mikhail Gorbachev, explains how that blessing can turn into a curse for Russia and other countries that rely too heavily on natural resources to keep their economies afloat. And finally, student loan defaults are a stubborn problem in this country. In fact in 2010, nearly 375,000 students defaulted in the two years of beginning repayment. Jane Shaw, president of the Pope Center for Higher Education Policy, discusses a new idea to make universities and colleges partially accountable for defaults. They currently are not.

Carolina Journal Radio No. 869: Fighting back against public education myths